So, here’s an ultimate creeper post. I found all of this info on Twitter. The reunion show was filmed on Aug. 31st in NYC, and it looks like Maria Menounos was the host.

There she is with Robb!

All seven members of the cast were there, here’s most of them. Notice Marie’s face.

The lack of Trey can be explained by the fact that he took the picture.

The cast was also provided with Subway, which Robb promoted.

It’s a good thing Subway was provided. The girls had a lot of free time while waiting for the guys to get ready.

And the cast was able to go out after the filming to hit up NYC! 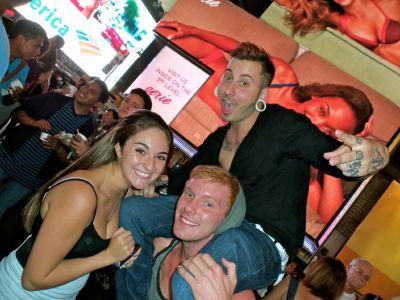 Now, I’m not going to spoil the reunion for you. If you want reunion spoilers, they exist and you can find them if you want (I’m sure Google can help). Here’s the evidence that there was a lot of drama during the show:

It’ll be on September 12th. Right after the season finale!

One thought on “St. Thomas Reunion- Filmed and Full of Drama”