Diem’s stomach continues to hurt, so she goes to the doctor while CT is out clubbing with the rest of the cast. When the cast comes home, CT is scared for Diem and tells production to take him to the doctor. They refuse to let him go because he has been drinking, and eventually they call Diem and let CT talk to her. She returns home later in the night and seems to be doing better.

The next morning, she awakes to pain and CT has to carry her to the van to take her to the hospital. While gone, CT start to create a “welcome home” box to surprise Diem when she returns. But she never returns, and TJ informs the cast that Diem’s medical condition is going to prevent her from continuing in the game. CT leaves, but we all know he’d drop anything to be by Diem’s side.Diem is airlifted from Panama to NYC when she begins her cancer treatments.

The next challenge is named On Again, Off Again and is a heights/ swimming challenge!! The cast goes two pairs at a time and must hang onto spinning ropes on a zip line. The longer you can hang on, the less swimming you’ll have to do. While some teams are unable to swim (Nia & Leroy/ John & Simone), others rely on their ability to swim to complete the challenge. Ultimately, Simone’s inability to swim causes her team to finish in last and go into the Dome, while Sarah and Jordan manage to win for the first time this season.

3. Mastermind 8 Seasons in the Making

Sarah decides that it’s finally time for her to play the game before the game plays her. This season, her strategy is to play both sides. So she forms alliances with Wes & Johnny Bananas. Her logic: wait for one of those guys to make a big move to get the other out. Regardless of the outcome, she’ll be on the victor’s good side. Of course, Jordan wants Bananas out, but Sarah says that they’ll make a move when the time is right. Now’s not that time.

Ultimately, Sarah and Jordan select Adam and Brittany to face John and Simone in The Dome. All of the Real World elitists rejoice, as this move guarantees that one of the Are You the One kids will be out of the game. In her confessional, Jonna acts surprised that Adam and Brittany were selected for The Dome and acts like she would have done something differently. 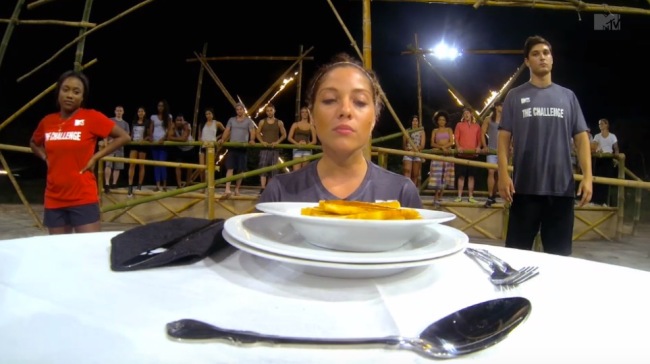 In perhaps the saddest elimination ever, the teams had to bet how much of a food their partner could eat in 3 minutes in a Dome named He Said, She Said. The foods are completely normal, though some are common foods in Panama. The first dish is brownies, which Adam finishes and remains hungry. The second food is sticks of Yucca, which is similar to a potato. Brittany can’t finish her dish, so John and Simone get a point. The final dish is fried plantain slices, but John can’t eat them so Brittany and Adam win.

The Battle of the Exiled game is called Mental Problems and requires teams to run relay-style to retrieve colored coconuts and arrange them in a grid so no color repeats in any row or column. Dustin and Jessica get their coconuts faster, but John figures out the winning strategy so he and Simone stay in the game.