Per usual, the cast starts off clubbing. Apparently, Nia loses her wallet at the club so the next day Zach says he’ll pay her $70 to drink a cup of his sweat. Desperate for the money and willing to put anything in her mouth, she agrees. She ends up spitting out the sweat, but she gets an A for effort.

After winning last week’s challenge, Zach & Jonna are given the opportunity for Zach to chose the order teams will participate in the next challenge and Jonna is given the daunting task of using a pen and paper to write down the order.Bananas wants Zach to put Wes & Theresa first, but Zach does not want to do what Bananas tells him. So, Zach puts Wes & Theresa fourth on the list. This angers Bananas because going fourth still allows Bananas to watch three teams perform and learn from their mistakes. 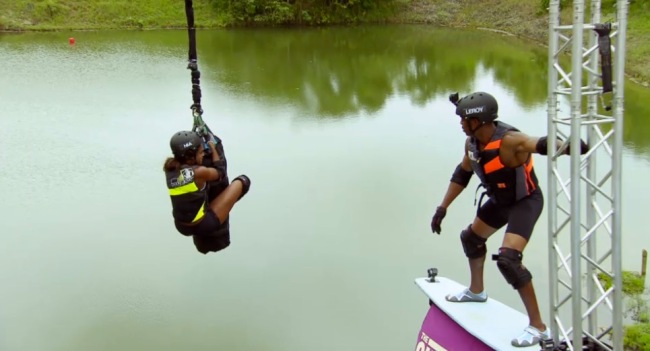 This week’s challenge is called Open Arms. The challenge requires the cast to hang onto some objects, zip line down a rope, and swim to a buoy. There are some other rules, but no one cares about them so they don’t matter. Leroy & Nia fall quickly and get the worst time while Wes & Theresa manage to get the fast time making them the power couple and pissing off Bananas.

With the power as the Power Couple, Wes & Theresa agree to make a power move. Knowing Leroy & Nia are already in The Dome, they decide to send in Bananas & Nany. This decision is fueled by Banana’s anger due to the fact that Zach did not make Wes & Theresa complete the challenge first. 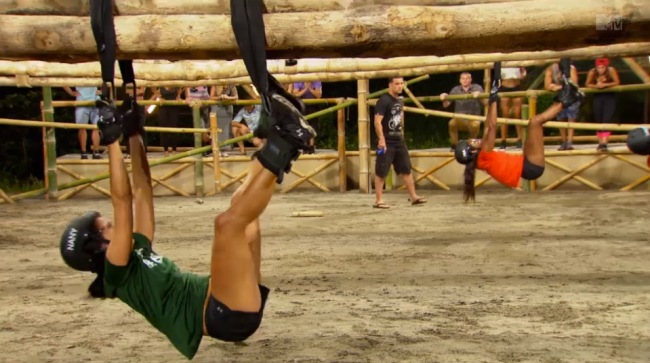 This week’s Dome is called Strung Out and the competitors are hog tied to poles. The girls must shimmy to one end, ring a bell, and then shimmy back to the beginning and ring another bell. Then the guy does the same thing. First team to complete this wins. Nia and Nany are neck-and-neck until Nany gets caught on a piece of wood. Her delay allows Nia to complete first, allowing Leroy to zip across the pole and back before Bananas even has the chance to compete. Hell freezes over, and Bananas & Nany are eliminated.

This week’s Exiled challenge is called The Ring. There is a ring with 4 ropes attached, one for each competitor, and the goal is pull your opponents off of their platforms. Best 3 out of 5 wins. Unsurprisingly, Bananas & Nany pull John & Simone off their platforms effortlessly 3 times and win.