Part One of the reunion has aired, and Ashley received a verbal lashing for stealing Hunter’s share of the prize money. Some people can’t understand this, others agree with Ashley’s decision, but very few are actually surprised. Naturally, parallels are drawn between Ashley stealing Hunter’s money and Bananas stealing Sarah’s money on Rivals 3. When Bananas was asked about Ashley’s decision he defended Ashley. He stated that they didn’t come into the house a friends, so why wouldn’t Ashley take the money? She’ll get some shit for taking the money, but she’s not even going to lose a friend in the process.

Now, Ashley has been branded as a thief and liar, the same labels that have been applied to Bananas. Some say these two are cursed, destined to never win again, but one thing is for sure: they have a lot of money. Let’s see whose decision was more savage. 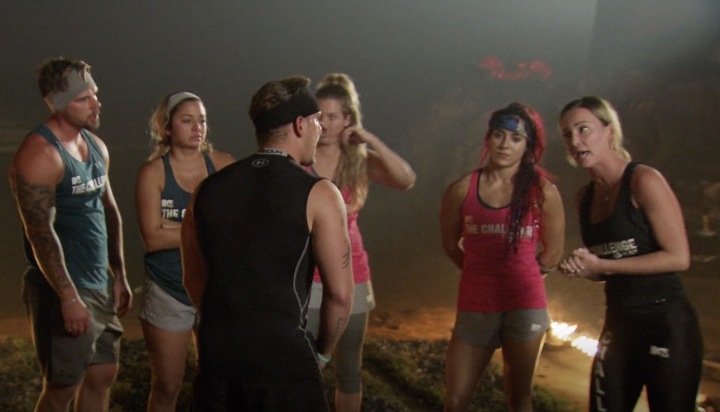 Prior to coming onto Final Reckoning, Ashley stated on the Challenge Mania podcast she wanted Hunter as a partner for Battle of the Exes 3. Though Final Reckoning wasn’t exactly Exes 3, Ashley knew Hunter would be a great competitor and partner. She was right, and she performed quite well with Hunter. What Ashley didn’t account for was Hunter’s competitive nature, and how challenging it could be to work with Hunter. As the season progressed, Hunter continuously blamed Ashley for any struggle on the team. At times it may have been warranted, such as during the Sky Bridge challenge, but there were also times when Hunter’s verbal abuse was over the top. Ashley cites Hunter’s abuse and “slut shaming” for her decision to take the money.

Hunter’s most savage comments were after he discovered Ashley hooked up with Kyle. While talking with some of the guys, he said “if that slut costs me $1,000,000, I’m coming for her and her family.” This visibly upset Ashley who felt she was being shamed simply because she was a female. It also hurt her because her father and grandfather passed away recently.

Now that she took home the entire $1,000,000 prize from Final Reckoning, Ashley is the richest Challenger ever. Her decision robbed Hunter of $500,000, but her ruthless decision gave her a huge paycheck. This huge sum has to be part of the reason why Ashley took the money. However, her relationship with Hunter only deteriorated throughout the season. They drifted further and further apart, and I think Ashley went into the final knowing she wanted to take the money. I can’t believe that the competitors on Final Reckoning hadn’t considered the of taking the money. Ever since Rivals 3, competitors have known that this twist may present itself.

Production has kind of given Ashley a victim edit on the final episode and on the reunion. I really think this is disproportionate to the amount of abuse she received on the prior episodes. I believe that one “slut shaming” comment where her family is mentioned hit Ashley really hard. She never forgot this comment and it was Hunter’s downfall. Any chance at being Ashley’s friend was lost once he said that comment and that cost him $500,000. In the end, Hunter’s treatment of Ashley after the final is proving her point. He does resort to verbal abuse when frustrated, though Ashley isn’t entirely innocent. Ashley didn’t lose anything by taking this money, though it may impact her on future seasons.

I’m going to say this: I completely understand why production introduced this twist on the Rivals 3 final. On episode 1 of Rivals 3, everyone knew this team was going to win. They were the strongest team on that cast and any team that posed a threat got kicked off the season for getting injured or being nuts. Production had to do something to keep this show interesting.

Going into Rivals 3, Bananas had a huge grudge against Sarah. She sent him into the final elimination on Exes 2 and this cost him the game. Sarah said she didn’t take anything away from Bananas, she just sent him into elimination where he had the chance to redeem himself. This is true, but I also feel she seriously downplayed her friendship with Bananas that season. They were close on seasons like Rivals, Exes 1, and Rivals 2 and had a good number of mutual friends. On Exes 2 Sarah even said she and Jordan were riding the line between Bananas’s and Wes’s alliances. As far as Bananas knows, Sarah was his ally on Exes up until she sent him into elimination.

By the time they showed up for Rivals 3, Sarah and Bananas began to work very well together. They complimented each other and gave each other credit when one person carried the team. During Power Team dinners the two apologized. Sarah admitted she placed victory over a friendship and Bananas apologized for not being able to view the Exes 2 incident through Sarah’s eyes. It appeared they were rebuilding this friendship.

I don’t think anyone on Rivals 3 considered the possibility of stealing the money until the final challenge. This was a new twist at the time, and it rattled both competitors when TJ announced it. When Bananas took Sarah’s cut of the prize money, she was upset. She felt betrayed by a real friend. His gain directly took something away from her. On Exes 2, Sarah jeopardized Bananas’s game but he could have redeemed himself in elimination. Also, Sarah could not have possibly won on Exes 2 if Bananas won. On Rivals 3, both could have won and received a nice pay check, but Bananas wanted the whole prize for himself.

Sarah put forward effort and showed vulnerability when rebuilding her relationship. It’s no secret Sarah was in school and her prize money would have aided in her obtaining a professional degree. Now, their relationship is as bitter as ever. Johnny has the money, but he’s allegedly cursed to never win again.

If we’re looking at money, Ashley. If we look at the whole picture, I think Banana’s theft was more savage. Bananas truly sacrificed a friendship for his money. Sarah spent weeks trying to rebuild her relationship with Bananas only to have it ruined by a twist. By contrast, Hunter and Ashley’s relationship slowly deteriorated during Final Reckoning.

We know Sarah had plans to use her winning to better herself. I really don’t know what Hunter would have done with the money, but I have every reason to believe he would have used it to better himself. This is a lot of money, and he watched his dreams dissolve just so Ashley could double her winnings.

I truly think Sarah is a more sentimental person. Relationships matter to her and she likely views this action as a major betrayal and loss of trust. I think Bananas broke her heart when he took the money. I think Ashley only confirmed she was as ruthless as Hunter believed she could be.

Transformation Tuesday. Tori this season vs. last season.
Why did Jenny and Rogan pick Cory. This still doesn’t make sense to me. 🤔
There was not enough Melissa in episode 1.
Who are you more happy to see this season?
How do you feel about Rogan this season. He came in first this week after winning last season.
Did y’all like Nany and Asaf as an item?