If you’ve watched a recent Challenge season and seen conversations online, you’ve seen the complaints. People are complaining the finals are too weak, there’s too much drama, and there isn’t enough competition. Well, that’s about to change. At least TJ thinks so.

Earlier this week, TJ replied to fans who complained about the show has gone downhill. His message to them: “give it one more season.” 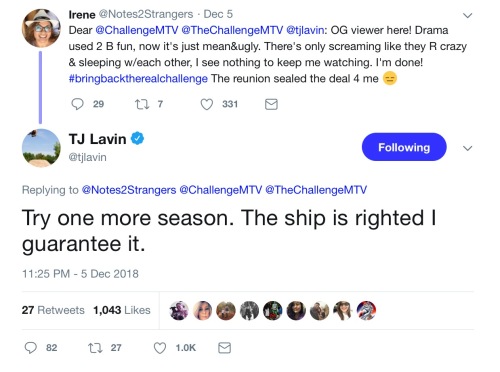 Anyone who has seen the season 33 cast knows the upcoming season is going to be very different. It’s reassuring to know someone cares about the fans complaints. This will be TJ’s 23rd season hosting and he’s a hardcore fan of the show. I trust TJ’s opinion here.

If the trilogy left a sour taste in your mouth, please don’t quit The Challenge just yet! Keep watching for TJ’s sake. He promises the game will be harder and he clearly cares about the fans.