This week’s challenge forces competitors to face some of their biggest fears. In Eye in the Sky players are harness back to back and must walk around four beams suspended in the air. The catch? The forward player is blindfolded with a camera on their helmet. The backwards player is wearing VR goggles that stream player one’s helmet cam. This means the backwards player is the eyes, and this freaks a lot of players out. Wes & Dee manage to get through this elimination quickly, setting the pace for later teams. This motivates Bear & Da’Vonne, even though they’re safe due to the Relic. These two teams make the Tribunal, joined by Jenna & Gus who posted an impressive time thanks to an impressive jump at the end.

At the Tribunal, Jenna & Gus are quick to nominated Josh & Amanda. Jenna has few enemies, but Amanda is one of them. Meanwhile, Bear wants to nominated Paulie & Ninja because they’re the strongest team and they may not have the chance to send them in again. Da’Vonne doesn’t want to do this because Paulie is her ally. While the two are discussing this, Wes & Dee nominated Ashley C. & Kam because Wes is trying to split up the UK alliance. This puzzles Bear, but he eventually gets his way and convinces Da’Vonne to nominated Paulie & Ninja.

After a night of clubbing, some of the UK kids start to pick up on the U.S. kids rallying together. Particularly, Ashley C. noticed Amanda politicking and talking to Nany and Jenna. He calls out Amanda, and they start to argue. When Josh hears Ash called Amanda a bitch, he intervenes and stands up for Amanda. Josh says he’s not scared of Ash, and can’t wait to send Ash home. Then, Ash starts to throw Josh’s stuff out of his room, giving Josh a head start for his inevitable departure should the two ever go head to head. Production intervenes when Josh gets emotional and they deescalate the situation.

At the killing floor, Da’Vonne tries to right her wrong by voting in Kam & Ashley while Bear sticks with Paulie & Ninja. Unsurprisingly, Gus & Jenna vote in Josh & Amanda. This leaves Wes & Dee. They’re given the opportunity to send in anyone… and they decide to send in Josh & Amanda. After some deliberation, Josh & Amanda decide it’s time to face Kam & Ash. 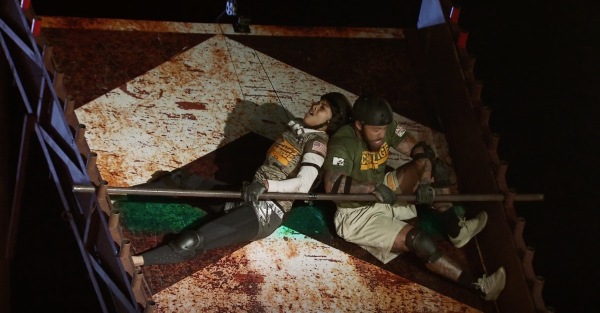 The elimination is a glorified salmon wall, where the teams must move in unison to climb a ladder using a beam. As they get higher up, the width of the ladder widens and the beam has less slack. Whoever gets to the top first wins, or whoever makes it farther without falling wins. Josh & Amanda shock everyone with an early lead, but they slow down near the top. With the ladder getting wider, Josh cannot support himself. They fall with just a few rungs left. This allows Kam & Ash to take their time and make it farther than Josh & Amanda, sending those two home.