We start again. Kind of where we left off last season. Just a lot more Brits.

Thirty two cast members arrive. Fourteen Brits, fourteen Americans, and four “Reinforcements.” The first challenge is called Trench Warfare and the UK and US teams must traverse an obstacle course with 28 flags representing their country: 2 for each person. There are walls made of bamboo chutes, a wall of sandbags, and a lot of bodies. Team UK seems to have a decent lead, and Idris even bodychecks Wes to the ground. To make up time, Laurel takes it upon herself to force back some of the UK girls. This works, as Big T and Nicole get suspended by Laurel. This allows Team US to get the first win. 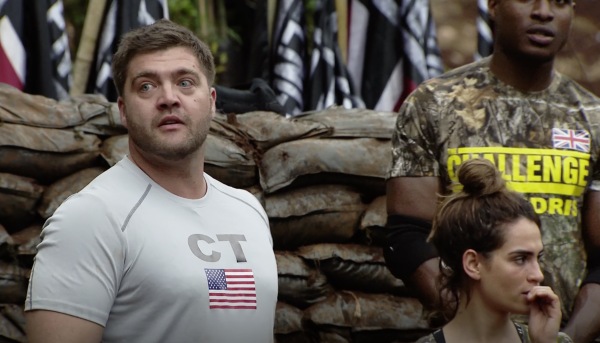 CT, Turbo, Ninja, and Dee show up as “Reinforcements.” As the winners, Team US gets to pick one male and one female to join their team. The other two will head over to Team UK. For the girls, Team US gets Ninja so Dee is on Team UK. For the guys, they pick Turbo. This sends CT away from the rest of the Americans and onto Team US. CT is mad, but welcomes the challenge. He saw a group of strong US competitors and now has to work against them. As the winners, Team US also gets to pick three people to make the Tribunal. As the loudest person on the team, Jordan selects himself. He then picks two more: Wes and Laurel.

CT and Kyle are talking, then Josh and Laurel join them in the bedroom. CT is annoyed by Josh and wants him to leave, but he doesn’t want to leave. To be honest, cameras didn’t catch the beginning of this fight so details are kind of hazy. But, CT finds himself screaming as Josh. This escalates into Josh calling CT an asshole and production having to hold back CT. While fists stay waist side, Josh isn’t making any new friends (well, except Laurel I guess).

At the deliberation, the Tribunal gets to watch Team UK nominate one guy into elimination. It comes down to Sean or Bear, but Sean quickly gets nominated. Now, he can appeal to the Tribunal. He claims he doesn’t know anyone from the US, but he wouldn’t mind going against Bear. Wes seems satisfied, but Bananas advises Jordan and Laurel not to vote for Bear. This is because Bear is a known nemesis of Wes’s, and nominating someone like Rogan would force Wes to expose the fact that he’s working with JOGAN. Word quickly gets to Rogan, who tries to secure safety from Jordan.

At the Proving Ground, Wes vote for Bear. However, Jordan and Laurel both vote in Idris so he is now competing against Sean. They’re playing Pole Wrestle, best two of three wins. Sean gives it his all, but Idris has the endurance to go far. After all, Idris is a boxer. Sean quickly loses and Idris is presented with a choice: return to Team UK or join Team US.