TJ welcomes the cast to the final. We’re in the first half, and this time competitors must carry a gurney made of bamboo through four laps in the jungle. Each lap is four miles. Each team will have 20 pounds worth of sandbags per player plus an idol on the gurney for each player on the team, and only four competitors can hold the gurney at a time. This means UK has less weight, but US has more people to rotate through holding the gurney. TJ also includes some rules: you may not tamper with the other team’s gurney and if the gurney breaks, just keep going and keep the gurney and snadbags intact. Team UK gets off to a slight lead, securing the lead at the first checkpoint where they must use a catapult to launch three coconuts into a basket. The US is close behind, but the next checkpoint will prove to be more taxing.

Team UK maintains their composure and reach the second checkpoint with Team US not far behind. This checkpoint places two huge boards full of numbers in front of competitors. Each competitor has a math problem using the numbers on the board, but they will need to decipher through hundreds of numbers before getting their answer. Most people finish fairly quickly, but Dee, Rogan, and Cara Maria struggle. Cara begins freaking out while Dee and Rogan remain more composed. Cara Maria manages to finish before the Brits, so Team US can move on, but Dee and Rogan manage to finish shortly after Cara. Now Team US has the lead, but people are starting to doubt Cara Maria’s abilities.

3. Commotion in the Jungle

During the third lap in the final, Paulie and some of the girls take control of the gurney. This proves to be a hardship on Team US with Paulie struggling the most. He is visibly uneasy and starting to panic. Meanwhile, Team UK is doing well and their perceived weakest player, Dee, is moving at a great pace. Eventually Team UK gets in the position to pass Team US. The paths are narrow, and Paulie tries to block the UK gurney from passing by his gurney. Eventually Team UK muscles by, and CT pushes the US gurney to make a path for his team. The light at the end of this tunnel is not a good one, in fact it’s a nightmare for many players.

The third checkpoint gives competitors three shots to throw a coconut into a basket. If you miss all three shots, you’re eating. Today’s meal includes: a dried scorpion, a bowl full of bugs, and a shot glass with a living, fat grub worm inside. On Team UK, only CT and Tori make a basket. The rest of the team eats, and while Dee struggles the most she pushes through the meal fairly quickly. Then, Team US shows up. Ashley goes first, and end up eating first. She chows down like she’s having a picnic and actually enjoys the scorpion. She’s seem to be the only one who does well here. Aside from Ninja, who made a basket, the other players struggle with their food. The desire to win allows most competitors to push through, but Cara Maria is the last girl to eat. She starts to puke and cry, noticing the worm she swallowed was still alive when it came back out. Eventually she chews everything, but most of her meal as been vomited out. Time to do the next lap.

5. Pay for your Mistakes 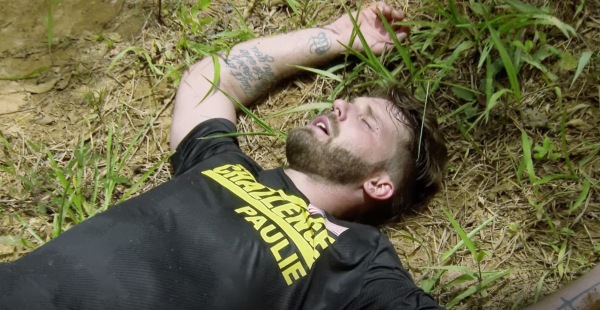 As Team UK holds a decent lead, TJ comes up and stops them. TJ gives them a ten minute penalty because CT rammed into the US gurney. Meanwhile, Team US has problems of their own and they’re worse than a ten minute rest. Their gurney is starting to break, so competitors pick up the sandbags and keep moving. Clearly, more than four people are working to move the weight at this point. Then, Paulie starts to feel exhausted. He claims he can’t see anything and sits down. His body is giving out while the rest of his team is trying to keep moving. At this point he’s lying in the dirt asking for water and cramping up. Team UK gets permission to continue with Team US nowhere in site. Can Paulie continue? We’ll have to find out in the second half of the final.