Three people remain without skulls. Will anyone get a red one? 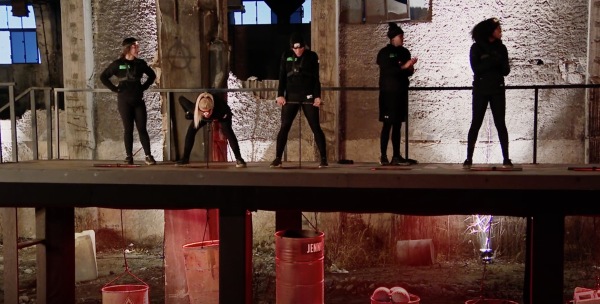 This week we have a double elimination, and the challenge is “screw your enemy style.” In Running Out of Time, competitors run to a pile of rubbish and pick up a piece. They throw it in their opponent’s bin so their opponents have heavy bins to hold. Once TJ blows the horn, it’s a game of endurance. Competitors must hold their bins off the ground and the male and females who hold their bins up for the longest become part of the Tribunal. Immediately, Josh, Fessy, Cory, and Nelson team up and target Kyle then Bananas and Rogan. They want to ensure Josh gets his skull. For the girls, it’s less obvious. Aneesa takes it slow while Kaycee seizes the opportunity to get some revenge on Bayleigh. TJ blows the horn, and competitors Kyle, Aneesa, and Nelson fail to make it back in time.  Then, Fessy cuts deals to get himself into the final with Josh and Cory. Meanwhile, Jenny wins with ease.

The Tribunal decides to vote for Josh as the third member. In Cory’s mind, this is bullshit. He was in the Tribunal when she was voted to get her red skull against Jenn and he saved Jenny when Dee was considering throwing her in later in the season. For Jenny, it’s obvious that Kyle or Josh should be thrown in, so they can face each other, but Fessy made a deal with Cory. After the challenge, Cory is angry and questions Fessy’s loyalty in the game.

For the guys, Josh and Kyle don’t have Red Skulls. For the girls, it’s only Bayleigh. Now that there’s another female elimination, that means Bayleigh needs to compete against a girl with a Red Skull. The men start to question Aneesa’a ability to run a final, fearing they’ll be paired with her. Nelson fills Aneesa in on the discussions the men are having, but Aneesa feels she’s strong at puzzles and prepared for the finals. Now, she has to politic and use this information to her benefit. She appeals to Jenny, saying she’d be weaker competition.

4. Tried By The Tribunal

Bayleigh and Kyle get voted in, and the Tribunal only has to send in two males and two females. For the guys, Nelson and Rogan, and get called down with the understanding that Josh is just going to walk down there. For the girls, Melissa and Aneesa get sent down. For the girls, the Tribunal discuss the possibility to elimination with Melissa and Aneesa. Everyone in the Tribunal is cool with Aneesa, but worry about her in the final. Melissa feels the pressure, and lets they guys know Aneesa is a risk in the final. No one in Tribunal feels close to Melissa, but knows she’s the stronger girl. At Purgatory, Fessy votes in Melissa while Jenny and Josh send in Aneesa.

The elimination is called Knot of War. It’s Knot So Fast but instead of a cage, they’re tying the rope around a car. The girls go first, and Aneesa tries to move strategically while Bayleigh is moving quicker. The switch, moving neck and neck. It seems like Aneesa is moving slower the Bayleigh, then in one move Aneesa gets all of her rope out of the car. In the end it gets down to a race of pulling rope out of the right and Aneesa loses. Then they guys go. Josh moves decently well, but Kyle is moving strategically. The guys switch, and Kyle is able to untangle Josh’s rope quickly while Josh seems to think he’s supposed to be making more knots. So, Kyle wins. Now Bayleigh and Kyle have Red Skulls.