This week’s episode answers two pressing questions: are Thomas & Jamie still together, and who is preggo? Let’s check out the top moments from the sixth episode of Real World Ex-Plosion!

Thomas decides to call it quits with Jamie… kind of. He wants to maintain a good relationship with her, but he doesn’t want to label her as his “girlfriend.” Jamie views this as a break up, and when the roommates go out to the club she is prepared to flirt with other guys. However, she can’t ignore Thomas or the fact that he’s talking to Hailey. When she gets home, she calls her friend Hannah to talk about her frustrations and Thomas overhears the conservation. He calls Hannah a bitch, and Hannah calls her a “manchild,” which subsequently becomes a trending topic in the USA.

2. Jenny in the Kitchen with the Knife Brian and Jenny seem to be in a pretty good place with their relationship. However, the stresses of being on camera 24/7 are getting to them, and Jenny wants to break loose and not feel the pressure to tone-down her personality. So she dances around on the sidewalk, and Brian gets upset with her. Later, she is home and addresses the fact that Brian is being overly sensitive. The conversation goes nowhere, but Jenny dances around with a knife.

Thomas swears that he is not getting back with Hailey, but he does want to know why she decided to come onto The Real World. Previously she insisted it was because this was the perfect timing and she has a light course load at school. However, she finally admitted that she came to the house to address her feelings for Thomas, which seem to have come back since she came on the show. 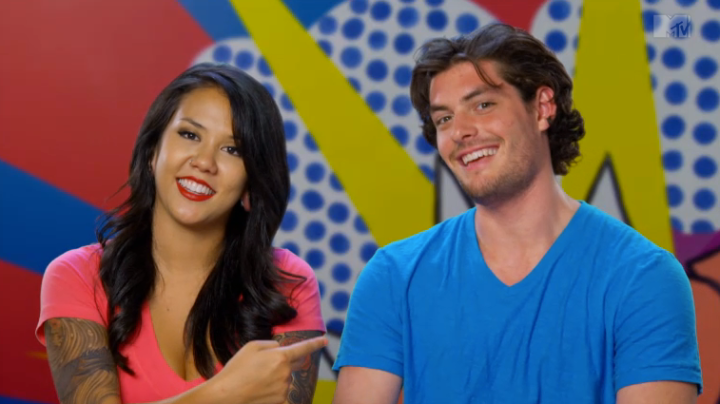 Thomas calls his dad and discusses how he broke up with Jamie, but his dad thinks he made a mistake by playing with Jamie’s emotions and tells Thomas the commitment in a relationship is important. This makes Thomas think, because he really does want to remain with Jamie. So Thomas talks to her, and says he wants her to be his girlfriend again. Jamie is happy, but says if Thomas tries to do something like that again, they are permanently done.

Lauren wakes up feeling nauseous, so she decides to take a pregnancy test. Of course, she purchases this test while out with her roommates, and she tells them she has to go to Walgreens, but no one else can come in with her. But Jenna seems to catch on, and once they get home Lauren takes the test.  It’s positive, and Jenna is the second set of eyes to confirm the reading. So Lauren reluctantly tells Cory… but then the episode ends.

Who’s your king?
They sent themselves in. Then they came right back with a 💀
The Challenge was born 22 years ago today!
What did you think of this?
An OG Challenge Champ. Who knows who this is?