TJ greets the cast in Gibraltar, and the cast is full of familiar faces and newbies from MTV UK. The theme is revealed, and people are kind of shocked but mostly confused by the wordvendetta. Regardless, they’re getting right into the game. This season they’re playing for $500,000 and the games start NOW. The first challenge is a race and the first person to climb the Rock of Gibraltar wins $25,000. The last male and last female to complete the race are sent straight home. 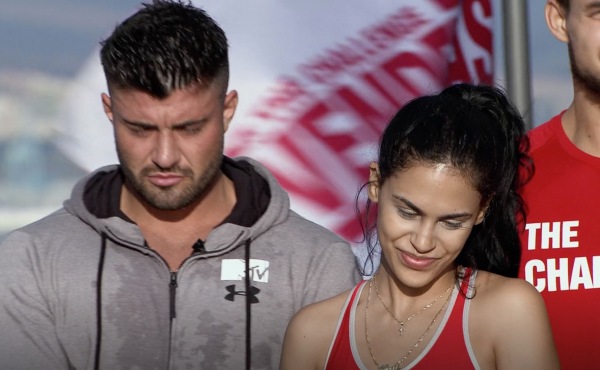 The Get off the Rock challenge begins, but there is one more twist. For the first time ever, the first challenge is an overnight challenge. Ex on the Beach star Joss leads the pack to the midpoint while Nicole R. is in the back. At the midpoint station, cast members discover they have to stand in a rope circle and hold a suitcase for 6 hours. Once that is done, their race continues and they leave the midpoint station in the same order they arrived. After leaving, Joss completes the race first while another Ex on the Beach star, Rogan, experiences back pain and needs a medic. He finishes last, but Nicole R. finishes last for the girls. Nicole and Rogan are going home before the game even started.

For the first time in recent history, Bananas is not in a relationship on this show! His eyes are set on a fun, young reality star from Big Brother: Natalie. Bananas offers her full access to his toiletries and 24/7 access to his bed.

On this cast, we have champion and old school veteran Brad, who recently ended his relationship with (now) ex-wife Tori who he met on The Gauntlet 3. Brad wastes no time moving on, and his eyes are set on Britni. The two spend a lot of time snuggling and rumors being to circulate throughout the house. While they have their share of public displays of affection, they also spend some time behind closed doors.

Our third budding romance involved newbie Kyle from MTV UK’s Geordie Shore. Both Cara Maria and Marie have their eyes on Kyle, so Marie decides she’s going to make the first move. She goes up to Kyle and they make out in front of the whole cast. Cara Maria notices and tries to play it cool, but she’s quite obviously jealous. Kyle, who is the stud in this situation, admits that he would have picked Cara Maria between the two girls. Perhaps this is just the beginning of Marie’s rivalry with Cara Maria.