Anne (RW/RR Challenge)– On the first real Challenge, Anne sprained her ankle while jumping on a trampoline at the Playboy Mansion (because that was a thing back then), and was unable to compete in the final challenge, a money chamber, for her team. Road Rules still won and Anne still got paid, but she was the first person to unsuccessfully complete the final challenge.

Coral (The Gauntlet)– One of the most infamous moments in early Challenge history, perhaps ever, was when the Real World team was forced to abandon Coral due to her alleged spider bite. While some people may argue where or not the bite was real, Coral insists that it was, and The Miz will back her up.
Eric (The Gauntlet 3)– After convincing his team all season that he was able to run a final, Eric made the final race. Quickly into the run, the heat got to him. About half way through, his body could take no more and he started to doze off. By the time his teammates were literally dragging him, they decided to let him get medical attention. This proved to be as costly move, because the Veterans lost the final by completing the race without a full team.

Abe (Cutthroat)– After being a leader all season, Abe couldn’t take the heat of the Cutthroat final and was forced to receive medical attention. Being the unique person he is, Abe claims this was a euphoric moment where he was able to see his team come together and work without his guidance.
Sarah (Cutthroat)– Somehow, this moment seems to be forgotten in Sarah’s Challenge history. However, she was removed from the Cutthroat final to receive medical attention after vomiting during the run. On her podcast, Sarah blames the fact that she spent her time in Prague eating cheese and drinking wine, not the best diet for a final.
Jenn (Rivals)– Prior to the Rival final, Jenn and Tyler here suffering from gastrointestinal issues. While Tyler recovered in time for the final, Jenn was far from 100%. Being the first overnight final, Jenna’s performance was below par and in no condition to run all day. By nightfall, refs forced Jenn and Mandi to leave the final because they were that far behind.
Mike (Rivals)– Mike may have made it past the first day of the final, but without a solid night of sleep, he was not ready to climb a mountain on the second day. Already being in third, he decided not to compete which mean neither he nor Leroy would complete the final. 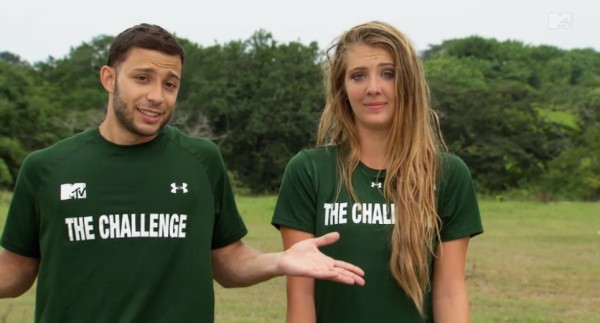 Jay & Jenna (Battle of the Exes 2)– This is exactly why people save “lay-ups” for the final. Jay and Jenna were quick to fall into last place in the final, and by the time they got to the eating portion of the game the stresses of the final caught up with them. Jay swore he couldn’t choke down the fishy beverage, and Jenna wasn’t going to fight him on the decision. Both of them removed themselves from the final, and received no money- not even the last place prize.

Nicole (Vendettas)– Nicole, who claims she’s better than Cara Maria, found herself in a tough spot in the Vendettas final. She knew she was in shape for a final, but didn’t realize she’d be running in mud. The unstable environment allowed her ankle to twist multiple times and in the middle of sabotaging Cara Maria she couldn’t take the pain and tapped out.

Remember when Wes had a Mohawk? Were you a fan?#transformationtuesday #nipslip
MTV didn’t recognize a good thing when they had it.
Did you like this blended team?
Poor Sarah. Even Google shades her.
#tbt to the RR 10 cast. Every single one of them did a Challenge!
How did you feel about this team?