Big news for Tony! I appears he has finally popped the question to Alyssa, and she said YES! 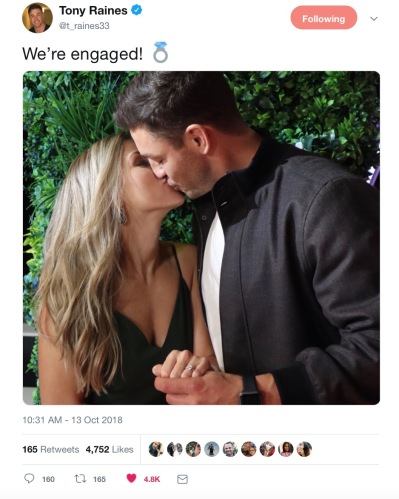 Pretty much all Challenge fans know Tony. They’ve seen his past but they’ve also seen him turn into a family man and a member of Team Dad Bod. Challenge fans may also recognize Alyssa who briefly appears on the Dirty Thirty reunion and was one of Tony’s skeletons on his Real World season. The two have a beautiful baby girl named Isla together. Isla has an older sister named Harper, whose parents are Tony & Madison. However, Tony and Alyssa have done a great job of keeping the girls together and forming their own family.

Personally, I am thrilled for Tony & Alyssa. They’ve grown so much and despite criticism from the public, they’ve done a great job forming and focusing on their family. I wish them nothing but happiness, success, and more Challenge appearances!