As reported earlier, Cara Maria is was donating all proceed from her Cameo appearance to the Equis Save Foundation. This was after Amanda stated she hopes her horse dies on The Challenge.

Today, Cara Maria shared her campaign was over (oddly on the day the new season of The Challenge starts filming). She raised $900 and was going add $100 to make an even $1,000. She posted pictures with her horse and then a picture of the check.

Of course, Amanda had something to say about this. After all, the check was made out on Amanda’s behalf. 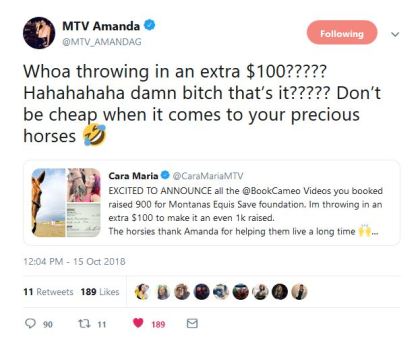 Amanda called the Vendetta’s winner cheap for donating a mere $100. Angered by this (and likely some other fan responses), Cara Maria posted this Tweet: 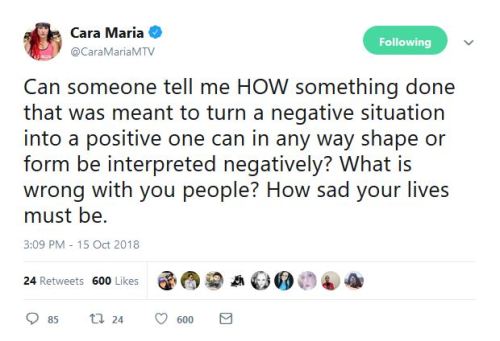 After seeing that Cara Maria feels it’s sad that people could interpret her charity as a negative situation, Jemmye jumped in: 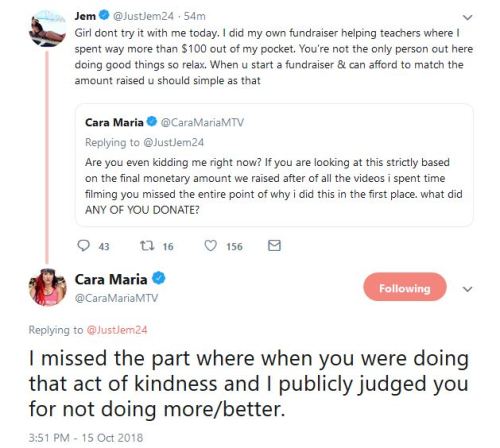 In a nutshell, Jemmye called out Cara Maria for donating very little despite having money, making this situation petty by including Amanda’s name on the check, and requiring high appearance fees for her charitable appearances. Just so you know, many cast members have participated in Challenge appearances with fans. They used to donate a portion of the proceeds to MedGift, a charity established by Diem to assist cancer patients. Cara Maria allegedly had high fees for these appearances.

I’ll let you make your own minds up here. I guess we couldn’t survive the entire last day before Season 33 without starting some drama.