We’re still chugging along. The end is near.

1. Lying With a Liar

Upon Nelson’s arrival in Redemption, he is greeted with accusations from Kayleigh. Bananas told Kayleigh that Nelson was lying in bed and cuddling with Natalie, which Nelson denied. After the initial blow-out, Nelson and Kayleigh talk alone outside. Kayleigh decides to believe Nelson because she has fallen for him and their time together is limited. But let’s take another look at this: Kayleigh outed Natalie as a “lesbian,” claiming she couldn’t destroy the Banatalie relationship because Natalie was a lesbian. Now, Natalie has cheated stole Kayleigh’s man? Thank u, next.

The four teams in Redemption are greeted by TJ, and they’re drawing crosses. Fortunately for everyone, they all get to compete. This also closes the Redemption House, meaning all losers will actually go home. The person who draws the double cross gets to pick their opponent, essentially choosing both match-ups. Brad & Kyle get the double cross, and at Armageddon they choose to compete against Kam & Kayleigh. This leaves Shane & Nelson to compete against Bananas & Tony

3. Subtracted from the Game 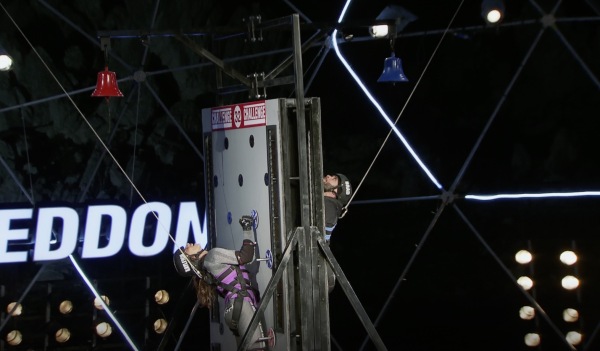 Brad & Kyle face Kam & Kayleigh in I Got You Pegged. The goal is to place 16 pegs in a wall, climb the wall, and ring a bell. However, there are numbers on the pegs and they must add to 32. Kam takes control has the adder while Brad, who was an accountant and has taught math, wants to climb because he can add by looking at the wall. There’s no denying that Brad is faster, but Kam lays out all of the pegs to ensure she has the correct 16 that will add to 32. While Brad rings the bell first and Kayleigh is a much slower climber, Brad’s attempt is wrong. Kayleigh benefits from Kam’s strategy and get the win. 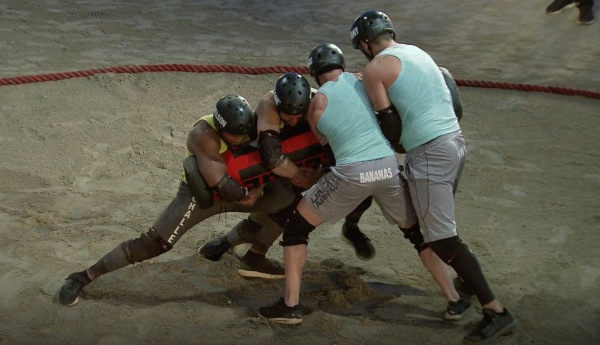 Another challenge, another Purge. In Rolling Thunder, teams must roll a huge ball down a course then up a hill in the fastest time. In the middle of the course there is a ditch and two path options. A shorter, but more difficult one and a longer, but easier one. Quickly, the people trying to take the short path get stuck in the ditch while Bananas & Tony take the lead. Joss & Sylvia are successful in catching these two guys and manage to climb the hills faster than them so they win the Challenge. Meanwhile, Kam & Kayleigh struggle in the ditch. They finish last, but Kam makes sure they at least finish. This means the girls who just won Redemption are headed home.