Another week that proves the more Challenge experience you have, the worse you’ll do.

This week’s challenge comes straight out of an action movie. In Doom Buggy, Challengers must traverse a string of ten tires as quickly as possible, releasing the tires as they pass over them. Of course, the tires are being pulled by a monster truck going up to 30 km/h. If a Challenger manages to get through all ten tires, they may release both strings of tires, stopping their opponent dead in their tracks. This challenge proves to be more difficult than expected, with Ninja going first and progressing through 0 tires. Eventually, teams start doing better, and a few people get through all the tires. Wes is the only person who makes it to the end of the course and stop an opponent, Bear, by releasing the ropes. Even though Wes & Dee are safe due to holding the Relic, Wes wants to take this opportunity to take a jab at a new enemy. Bear is that enemy, and he should be scared. Wes & Dee, Hunter & Georgia, and Kyle & Mattie earn a spot in the Tribunal. 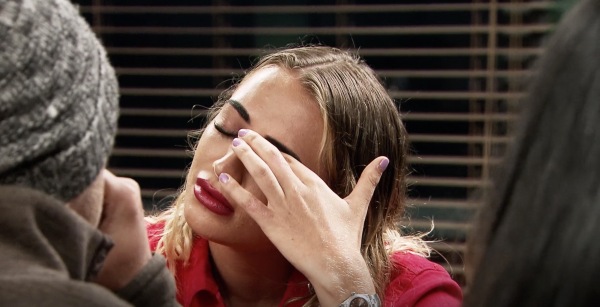 Kyle & Mattie vote for Paulie & Ninja in the Tribunal while Hunter & Georgia want to vote for Amanda & Josh again. Wes & Dee are the only ones with new tricks, going after Bear & Da’Vonne. Georgia, who has been flirting with Bear all season, wants to protect her friend. Wes is stubborn though, and drop a bomb on Georgia. He tells her that Bear said he found Nany more sexually attractive the Georgia. This upsets Georgia even though Bear denies the claims.

Kam has been flirting with Theo, and this seems to make Leroy jealous. Prior to this season Kam & Leroy had feelings for each other but Leroy wouldn’t commit. They agreed to be friend and cordial this season, but now that Kam has moved on Leroy is jealous. He view this as a sign of disrespect, but Kam insists she’s just living her best life. This results in some arguments, but it doesn’t stop Kam from kissing Theo.

At the Killing Floor, everyone votes in the team they nominated at the Tribunal meeting except for Hunter. He votes with Wes & Dee, solidifying Bear & Da’Vonne’s spot in the elimination. This raises some flags and people start to suspect Wes & Hunter are working together. Regardless, they must pick an opponent. Bear wants to call out Josh & Amanda, Da’Vonne is friends with Amanda and allies with Josh. So, they settle on Leroy & Shaleen because they suspect this elimination is endurance based and Shaleen is Shaleen.

The elimination is called Sandbag Burn and the teams have to transfer 80 bags across the Killing Floor arena. One opponent starts at one end, the other at the other end, and a sled is in between the two. The goal is to put the sandbags on the sleds and perform sled pulls to get the sandbags from one side to the other. The boys get their bags across the arena faster than the girls, so it becomes a race between Da’Vonne and Shaleen. Da’Vonne digs deep and finished the drill while Shaleen isn’t as efficient. This sends Leroy & Shaleen home. Leory has now lost 10 Challenges.