Vendettas and Final Reckoning saw the return of Brad Fiorenza, a Challenge champ and Real World alumni. He was gone from The Challenge for almost eight years, and his run on both seasons was pretty impressive.

Today, he posted on social media that he would be taking an indefinite break from the show: 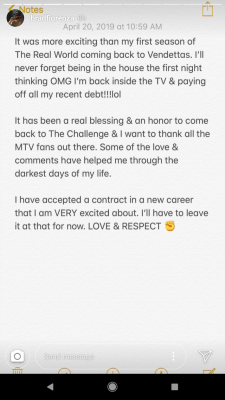 Much of Brad’s adult life was televised on MTV. His Real World season aired at the beginning of 2004. He subsequently appeared on eight Challenge season from 2004-2010. During the time, he met Tori who would later become is wife and mother to his two children.

Upon is Vendettas return, Brad was newly single. While some of the details about his split from Tori became public, and we do see the occasional social media feud between the exes, Brad also embraced some new experiences on Vendettas. He proved he was still a strong competitor  and then appeared on Final Reckoning aspart of a powerful team. Brad’s return to The Challenge was exciting, and had a lot of entertaining moments, so I’m sad to see this return get cut short.

I’ve seen a few retirements in my day, but this one seems legitimate. He’s not bitter with the show, but he has begun a new career. It’s sad to see him leave, but I’m happy he will be starting a positive new journey. If that doesn’t work out, I hope he comes back to The Challenge. He’s proven himself to be a worthy competitor throughout multiple generations of the show.

One thought on “Brad Announces Retirement From The Challenge”