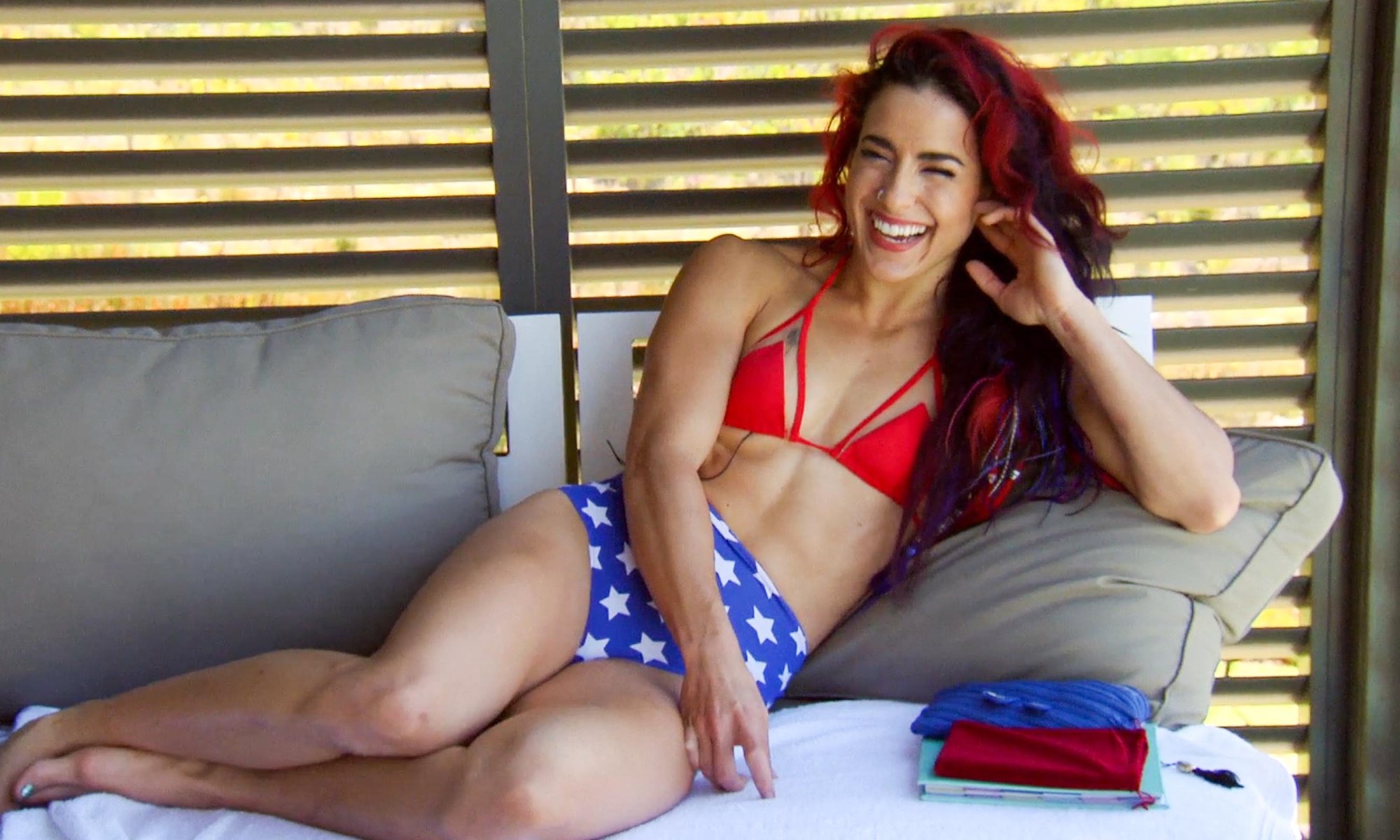 This week, we saw Nany argue with Cara Maria over their differing styles of game play. Nany was surprised to see Cara Maria would not keep her safe if called into the Killing Floor. The two veterans argued and Nany said Cara has not veterans honor.

Apparently, the two had an agreement (off camera) that they’d look of for each other. I like Nany this season and I’d like her to stick around, but I can’t fault Cara Maria for not protecting Nany. After all, Nany’s vote did get CT thrown into The Killing Floor, she is friends with Kyle, and she did try to convince Jenna to target Cara Maria. If Cara Maria wanted to take Nany out of the game, it’s not without its merits.

After their argument, Nany vented that she felt Cara Maria has had a very weird evolution on the show. She was once the nicest girl and now, as Nany put it, she has a stick up her ass. So what does Cara’s evolution look like? Here is my take on it, from someone who has seen every episode of Cara Maria’s Challenge career and watched it as the shows were in their original airings.

Over her thirteen seasons (plus Champs vs. Pros) we’ve learned a bit about Cara Maria. In case you didn’t know, here are some facts about her: She’s from the Boston area originally, rode horses as a kid, is an only child, and has a degree is psychology. She’s also known for her appearance, often wearing red hair and pirate dreads. When she’s not competing on the show she loves to work out, do Crossfit, and wear costumes.

Most people know she got her start on Fresh Meat 2. It’s also fairly common knowledge that the Fresh Meat cast is typically comprised of casting alternatives for shows like The Real World. Rumor has it production really liked Cara Maria back in 2008/2009, but couldn’t find a good fit for her. The Real World would have been filming the Cancun season, and she didn’t really fit into that party scene. She was also (allegedly) consider for the Bad Girls Club but didn’t want to do that. By the time Fresh Meat 2 got the green light, production saw a spot for Cara Maria.

Cara Maria entered Cara Maria as one of the top two female contenders. She was paired with Darrell and seemed poised for greatness. Then, she get sent home first and she did not leave the best impression on viewers. Luckily, she was cast on Cutthroat where she would truly establish her presence on the show. On this season she began her relationship with Abram and became an underdog after Laurel told her she was the weakest girl on the team, only surviving in the game due to her relationship with Abe. On this season, Cara Maria completed the final which is an impressive feat when you consider Sarah and Abe were medically disqualified from that final.

The next season, Cara Maria earned more praise after her success with Laurel on Rivals. It was during this season that she became the underdog to watch. She won two eliminations, made it to the final, and endured a lot of bullying. During this time she became close friends with Laurel but also started to make enemies with some of veterans. Namely, she got into fights with Bananas, Paula, and Wes during this season.

She returned on Battle of the Exes, which may be her most overlooked Challenge. She barely made it half way, fought with Abe, and was overshadowed by other teams. Being paired with Abe probably didn’t help her make more friends, as Abe is also enemies with veterans like Bananas, but this Challenge was an uneventful one for her.

Cara Maria’s introduction to The Challenge came during a funny time. Rather than introducing rookies from Cancun, DC, New Orleans, or Vegas, production mostly cast Fresh Meat 2 and the same old veterans. Then, Battle of the Seasons, the rookie revolution took over the show. Battle of the Seasons and Rivals 2 was a period of time when Cara Maria was at her ultimate-outcast level. On both seasons, she was a replacement. Fresh Meat was immediately targeted by all the rookies on Battle of the Seasons and Cara Maria was the third girl to get eliminated. This didn’t help her position in the game, but she did find herself excluded from the new wave of rookies taking over the game.

Rivals 2 was a very challenging season for Cara Maria, but also a huge success for her. She was brought in as Cooke’s replacement partner and immediately targeted by veterans and rookies alike. Despite this, she rose to the occasion. She won multiple eliminations and challenges, proving she was a fierce competitor. She was Emily & Paula’s biggest competition in an otherwise entirely predictable season. This season also demonstrates the old Cara Maria at her best. She was willing to fight and unwilling to compromise herself. Plus she did really well in the game.

Fast forward a season and we’re on Free Agents. Cara Maria and Laurel are reunited, and despite some riffs in their friendship, they called a lot of the shots on the female side of the game. Cara Maria continued to prove her dominance in the game until she lost to Laurel with a broken hand. By this point, it was clear she was one of the strongest competitors yet she had not secured her win.

Bloodlines and the Champion Years

Cara Maria’s eighth season is also her most notable. She won Bloodlines, but many people feel she sold her soul to do it. Apparently she tried to “politic” through the game which meant massaging Thomas to gain an ally. Later, Abe would show up for the season and their relationship would crumble. In all fairness, I think Cara Maria gets more shit than he deserves here. I generally avoid commenting on this relationship, so I’ll say this. I believe Cara Maria knew her relationship was over and tried to sabotage it. I don’t think she took the best approach, but I believe she felt stuck and this is how she tried to end things.When all was said and done, Bloodlines was a turning point for Cara Maria. She beat Bananas in elimination, won for the first time, and found herself newly single.

After Bloodlines we see Cara Maria starting to change. She became closer to some of the veterans, specifically Johnny Bananas. This can be seen on Champs vs. Pros and somewhat on Invasion. On Invasion we also see Cara Maria defending the hazing pranks against newbies and her connection with some veterans becomes clearer. This was a quick season for her, but it also ended her friendship with Laurel. After this season Laurel started dating Nicole Z., and Cara Maria seemed to demonstrate some jealous behaviors. Laurel felt Cara Maria’s words did not align with her actions and she didn’t need those people in her life.

After Invasion, Cara Maria would return for Dirty Thirty where she was the runner up female. For being so successful, this was really a season where other competitors overshadowed her. However, we do see a new rivalry form with Kailah and we see how strong her relationship with Bananas, CT, and Camila has become.

The Current Era: Love Triangle and All

Vendettas, Final Reckoning, and War of the Worlds (so far) have seen Cara Maria become one of the most successful Challengers ever. She was the sole winner on Vendettas and it a player that the males and females fear in the game. Despite this, most of her success has been overshadowed by the love triangle with Kyle and Paulie. I’m sure everyone is aware of this situation. Cara Maria and Kyle hooked up on Vendettas and dated briefly after the show. Then, she started dating Paulie on Final Reckoning causing a feud between Paulie and Kyle. By hooking up with Paulie, Paulie cheated on his then-girlfriend Danielle Maltby (from The Bachelor) which resulted in a public break up. Now we’re onto War of the Worlds. Paulie and Kyle are still feuding and they’re trying to divide the house based on the rivalry. This is part of the reason why Nany was mad at Cara Maria. Nany is simply friends with Kyle, no necessarily allies in the game. However, Cara Maria can’t accept the friendship and view it as a betrayal.

Of course Cara Maria has changed between 2009 and 2019. Everyone is going to grow and make mistakes over the course of a decade. Nany’s point is that Cara Maria’s evolution hasn’t been a positive one.

If you look at her early seasons, Cara Maria was always a bit of an oddball. She may not have clicked with everyone, but she maintained her authenticity and was willing to battle to win. She was an interesting competitor on the show for this reason. She didn’t rely on allies to win, she put all of her faith in herself. These are the types of people who become underdogs the viewers love to root for.

As time progressed, it appears Cara Maria forgave the people who bullied her and made her time on the show hard. It seems her independent mindset has fused with the group mentality of the veterans. We see this on seasons like Dirty Thirty when she votes Briana into the first Presidio. She claims it was because she was a replacement rookie, but this voting mentality resulted in her struggle on a couple of seasons. This can also be seen on Invasion when she’s pranking the new girls or on War of the Worlds when she tries to eliminate people based on their relationships.

I do believe Cara Maria is consumed by some of the attention from the show. Her online personality is one of the biggest reasons cast members have issues with her. She’ll go on Instragram Live and talk about her castmates or she’ll publish blogs on UsWeekly, knowing her cast members will not be able to respond in such a public forum. For someone who wants to keep her relationship private, she provides a lot of details in very public settings.

None of this is necessary. Cara Maria is one of the strongest girls who continuously demonstrates improvements in her Challenge performance. Her elimination record and Challenge wins are proof enough: she’s great at the game. She doesn’t need to rely on scare tactics or manipulation to survive. Yet she plays into the drama. She allows Kyle’s game to impact her game when it doesn’t have to. It seems more like an attempt to get camera time than an attempt to survive in the game.

I’m not saying Cara Maria has done anything wrong. This is an edited show and a lot of events are taken out of context. I will agree with Nany though. Weird is a good word to describe Cara Maria’s evolution.