When it comes to relationship on The Challenge, Paulie & Cara Maria usually stick out. The other relationship that is probably more serious is Jordan & Tori. These two have been together for over two years and they seem to be going strong.

WARNING: This post will contain non-elimination spoilers. Proceed at your own risk.

Soon, we will see those two return to The Challenge on season 34. They haven’t appeared on a season together since Dirty Thirty in 2017. If you don’t remember their past here’s a quick post to get you caught up.

Jordan debuted on Real World: Portland in 2013. He was known as stubborn, argumentative, somewhat irrational, but with a sensitive side that appeared on occasion. Tori was on Are You the One? 4 which premiered in summer of 2016.

Both have had prior relationships on MTV before meeting. Jordan was questionably involved with Nia on Real World: Portland, hooked up with Sarah and Jonna on Rivals 2, and had a quick romance with Laurel on Free Agents. Tori was involved with a few guys from her Are You the One? season. Namely, Morgan and Prosper. She also had a relationship with Mike C. from AYTO3 and RW: Bad Blood prior to appearing on AYTO: Second Chances. Her most notable romance was with Derrick H. on Dirty Thirty which ended immediately after that season and resulted in a huge scandal on the Dirty Thirty reunion.

Jordan came into the season single while Tori was involved with Derrick H. Derrick was one of the first to go home, and this left Tori distraught. The two were making plans for a future but six weeks apart is a long time. During her time on Dirty Thirty, Jordan took Tori under his wing. He consistently said he wanted to run a final with Tori and the two spent a lot of time together. Admittedly, they were close, but both insist nothing happened while filming the show. Tori didn’t want to cheat on Derrick, but she was clearly growing close to Jordan.

Jordan got his wish. Tori made the final with him and they were paired together during multiple stages. Tori got third, but Jordan won that season and received a hefty paycheck. Apparently, as soon as Tori had access to a phone at the wrap party she called Derrick and broke up. That’s when two became one and Jordan and Tori became an item.

At the reunion, they didn’t label each other boyfriend and girlfriend but admitted they were dating. Tori also a huge scandal where he phone was hacked, she thought Derrick did it, and a private investigator was called. Regardless, the damage was done and Derrick and Tori were done. 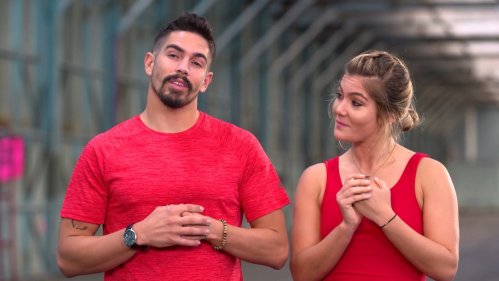 The two had a number of random MTV appearances, but not always together. Tori did Champs vs. Star 1 & 2 but never won. Both appeared on Vendettas as Mercenaries, Jordan won and Tori lost.

The most interesting appearance was their episode of Fear Factor together where they won, beating Cara Maria & CT. However, they never admitted to being a couple even though this was over a year after the wrapping of Dirty Thirty.

On the Champs vs. Stars 2 reunion Tori finally admitted they were dating. This was beyond obvious, as they were quite close according to their Instagrams. 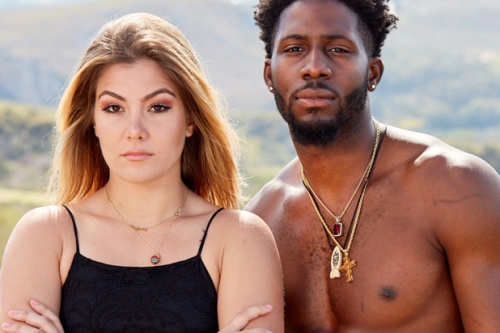 So, Tori appears on Final Reckoning with Derrick H. as her partner. Clearly, she’s not happy about this pairing, and they are not compatible at all. They lose an early elimination and get sent home before the second half of the season. By this point, we’ve learned this relationship is 100% over. We’ve also learned Derrick is pretty bad at The Challenge, but great at picking up girls. He thrives on Ex on the Beach, but Tori might be a little better at the competitions.

Life moves on, and Tori moves in. In November of 2018 the two announce they’re shacking up together. Their moving video is cute, and Challenge champion Jordan manages to drop a TV in the pool. This also shows how well the work together, something often overlooked on MTV.

Bloody Hell will feature both Jordan & Tori so fans will finally get to see them back at their roots. No doubt, Jordan is still a craft and argumentative player. Tori is likely still going to be a threat in the game, even though her performance on Final Reckoning may indicate otherwise. If you like these two, I’m guessing you’re in for a treat.

Tune in to season 34 for more information… hopefully.

UPDATE: Us Weekly confirmed their engagement will air on Season 34!

UPDATE in 2020: After filming Double Agents, Tori and Jordan have broken up.