Can the Brits finally snag a win?

The challenge is called Paddlewheel Puzzle, and competitors are about to get wet and dizzy. TJ reveals 16 lock codes that Challengers must remember, They must use these codes to unlock puzzle pieces locked to a large pipe rolling in the water. Then, they must assemble the puzzle. Team US goes first, and it’s a disaster. They’re falling on top of each other and can’t find the right locks to unlock. Eventually, they learn to yell out codes and all try codes on each lock at the same time. This takes a long time, but the puzzle is a breeze. Then, UK goes. They’re not fast, but they benefit from having seen the US go. They use the same number strategy as the US, but a couple stubborn pieces slow them down. Theo tugs on the pieces, and the locks break. TJ announces that the UK had the faster time, but they cheated by breaking locks, so the US wins again.

Josh speaks for Team US and he is in the Tribunal with Zach and Laurel. When team UK speaks at the Tribunal, Bear knows he’s in hot water. He tries to call out Idris, but this isn’t gaining supporters. Most people want Bear in the Tribunal, though Theo nominates Rogan. In the end, Bear gets voted in. The Tribunal asks who he’d like to compete against, but Bear says he’s trained and will go against anyone. This leaves things open for a wild elimination.

Wes asks Josh if the Tribunal will be voting in Theo, as Team US has the agreement to vote in strong players. Josh doesn’t give a straight answer and raises doubts among him team. Josh then leaves and the remaining people in the room shit on Josh saying he’s just a number on the team and now he’s “fired” because she’s not working with the team. What these people overlook is Laurel who appears to be sleeping. In reality, she hears the whole conversation and tells Josh. She then proposes a plan: send in Wes. 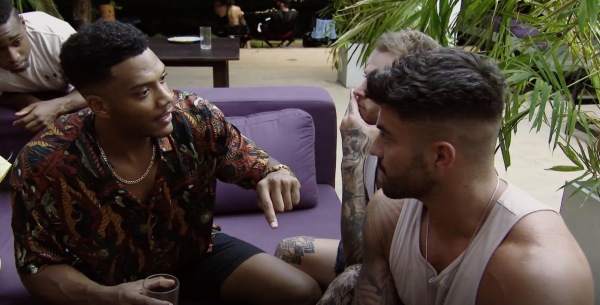 Theo questions why Rogan wouldn’t vote in Idris, but Rogan feels Bear is a time bomb on the team. This disagreement results in Theo calling out Rogan for being weak due to his early departure on Vendettas. This strikes a nerve with Rogan, who is now mad at Theo and believes he could snap Theo in half. The two argue, and security steps in, but it’s clear Team UK isn’t in perfect harmony.

5. Blinded In the Night

Josh and Laurel execute their plan, blindsiding Wes and sending him into The Proving Ground. Now, Bear’s dream has come true: he can eliminate Wes. The game is called Firing Squad, it’s basically Balls In, but the call is fired out of a cannon. Bear quickly scores in round one, leaving Wes at a disadvantage. In the second round, Wes gets the ball first, but Bear wrestles him to the ground. In fact, the two are wrestling and the ball isn’t even in the picture. Bear gets the ball, Wes loses, and Bear is back on Team UK.