As one alliance crumbles, one bond becomes stronger than ever before.

This week teams are playing Temple Wall Traverse. TJ announces the cast will need to climb across a series of climbing walls and Ninja says “cool.” Their goal is to hang up tiles on their corresponding hooks. Meanwhile, the opposing team is pedaling away to make the walls move, making traversing across platforms increasingly difficult. The team who hangs the most tiles the fastest wins. Team US goes first and sends their stronger climbers like Jordan and Ninja to go first. They hang a few tiles, but fall eventually. The rest of the cast goes with varying success, but they only get about half of their tiles hung. Then, UK goes. Their run begins with Rogan falling and taking Tori with him. This sets a dismal tone, and the rest of the team struggles. Theo and Jenny get a couple of tiles hung while Kayleigh and Dee stay on the platforms waiting for time to end. US win, as the UK on gets a couple of tiles hung. Paulie becomes speaker and picks Cara Maria and Josh to be in the Tribunal.

2. Traitors Within a Team

Team UK is dominated by a majority alliance, leaving Theo and Jenny to fend for themselves. So, they send Theo into elimination. This angers Theo who is about to go into his fourth elimination this season. He tells his team he is going to try to win, but he will throw the final so none of them win because he feels betrayed by his team. This sets an ugly tone leaving deliberation, but really, what does Theo have to lose? Cara Maria reminds Theo that the Challenge greats had to fight through many eliminations to become a Challenge legend, but Theo knows this is Cara Maria trying to save face. Her huge alliance is responsible for his troubles. 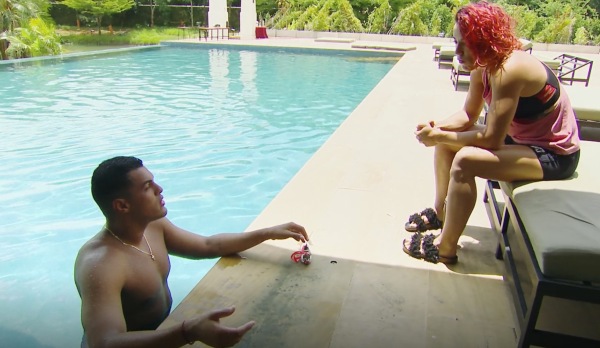 On the US, it becomes clear the Tribunal will be sending in one of their own. This makes Josh nervous who mentally prepares to see elimination. He shares frustrations with Nany who is also mad at her team. Eventually, Cara Maria asks Josh if he has issues with anyone. She knows he had issues with Paulie, but Josh confesses he doesn’t like her on a gameplay level. Cara Maria was just looking to have Josh expose his feelings and walks away without much of a conversation.

At the Proving Ground, Zach votes for Joss knowing it’s a burn vote. Then Paulie votes for Jordan, then Cara Maria votes for Josh. Cara’s just kidding though, she really votes for Jordan, so we’re seeing Jordan vs. Theo in a game called Under the Hammer. This game gives competitors a series of 12 nails and they must use a sledgehammer to drive the nails through a board. Beneath the board are lightbulbs and the nails must break the bulbs. Theo gets an early lead, to the surprise of most people. Jordan has a background working construction, and that background catches up with him. Theo proves less accurate with his swings and Jordan quickly takes the lead over Theo. In the end, Jordan wins and ends Theo’s winning streak.

After winning, TJ asks Jordan which team he’d like to join. He says there’s only one place he belongs: with Tori. He gets on one knee and asks Tori to marry him. She says YES and they two are officially engaged! Everyone on the cast is shocked and happy for them. That is, except for Cara Maria who rolls her eyes and says Tori will end up paying for that ring when Jordan loses. This isn’t Cara’s concern any more… Tori and Jordan are on Team UK now.

Greetings Earthlings
I know I’m not the only one who is devastated to see Jenn go. I thought she was gonna go far in the game.
Can Wes pull off the possum strategy?
Transformation Tuesday. Tori this season vs. last season.
Why did Jenny and Rogan pick Cory. This still doesn’t make sense to me. 🤔
There was not enough Melissa in episode 1.