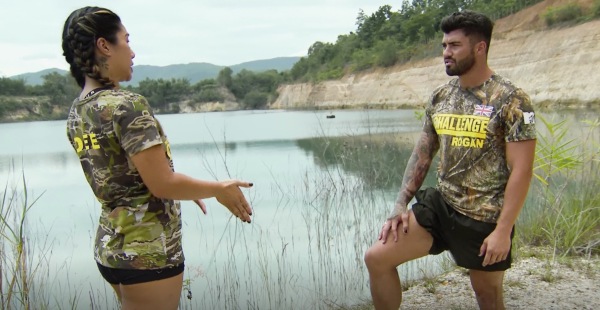 This week TJ greets the team and announces the challenge will be called Puzzling Swim. Ninja immediately starts crying. In pairs guy/girl teams, the Challengers must swim 150 meters, retrieve 2 keys, and swim back to the platform. Once all eight keys are retrieved, the teams can unlock a chest of puzzle pieces and solve this riddle:

There are nine people on Team US, so one girl gets to sit out. There are only 7 UK competitors, so one male swim individually. Then TJ drops a bomb: the slowest pair is purged. On Team US, Ninja gets to sit out because she’s an awful swimmer. Zach agrees to let her sit out, but he makes it clear that she only gets to sit out because she’s so bad at swiming that no one wants to risk being paired with her. Meanwhile, on Team UK Tori & Jordan and Kayleigh & Joss team up quickly. This leaves CT and Rogan to be paired with Dee, but CT insists Rogan swims with her. Rogan didn’t want to send Dee into the Proving ground, so he has to be her partner.

2. Swim For Your Life

The teams begin to swim, and it becomes clear that only a couple of girls can swim well. Jordan & Tori excel, while Zach & Ashley are the strongest team on the US. Paulie & Cara Maria are anchored by Cara Maria’s slow swim, but neither Kam nor Leroy can swim well. Josh & Nany post a decent performance, only because Josh allows Nany to grab onto his life vest and do all the swimming. Meanwhile, Dee swims decently and outperforms Kam. She’s not the worst performer to the surprise and delight of Rogan. Meanwhile, Kayleigh lags and moves at a snail’s pace. Team US gets all of their keys first, with UK close behind. The riddle proves difficult, with Ashley convinced the last three letters are “A-I-R.” She’s right, because Paulie determines the solution is Chair. Team US wins, and makes Ninja their speaker (for some reason). Ninja chooses Zach and Ashley to round out the Tribunal, but everyone is nervous to see who’s Purged. In the end, Kam & Leroy escape the Purge. Kayleigh and Joss get the boot because Kayleigh’s the slowest swimmer of them all.

At the Tribunal, Team UK quickly sends in Jordan, but not before Dee makes it clear that she is disappointed by CT and Rogan’s doubts in her. Ninja then asks Jordan if he feels bad for “belittling people” on Team US and if he regrets switching teams. Jordan says he has no regrets. If someone performs poorly, he’ll let them know. He says he’d like to compete against Rogan, but he really doesn’t seem to care much. 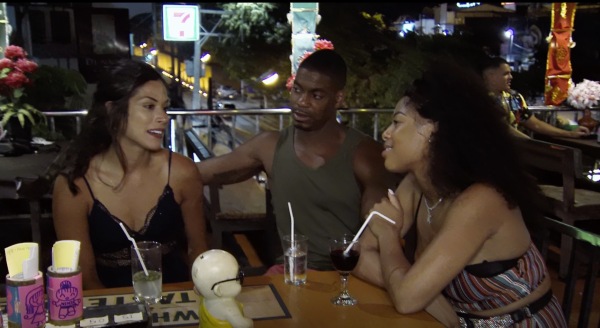 The end of the game is getting closer, and after narrowly escaping the Purge, Kam and Leroy become closer. Nany sees how happy Leroy has become with Kam, and the two may actually be building a real relationship. However, the game isn’t over and neither Kam, Leroy, nor Nany have won yet. This friendship will likely be short lived because there are still eliminations before the final.

At the Proving Ground, Ashley and Ninja vote in Josh while Zach throws a vote at Paulie. Regardless, this puts Josh against Jordan in End of the Rope. This is a tug-of-war game where each competitor is standing on a small platform. The goal is to get your opponent off the platform three times to win. Jordan, who only has one hand, needs to think of a strategy. He watches Josh pull the rope and tries to understand his body movements. Josh is putting up a good fight, but Jordan sees that Josh’s hands move before he makes a big pull. So, Jordan releases his rope a little bit before Josh pulls, resulting in Josh falling off his platform. Jordan’s strategy is a good one, because he uses it three times and gets the win. Josh is sent home and Jordan returns with much praise.

How Darrell plays a game of memory 😂
The Austin love is real.
Jodi wasn’t lying when she said she has mammoth hands ✋
Proof these two were homies 18 years ago.
On the way to eat a Greek salad 🥗
Which team are you cheering for on All Stars?