The Take Shelter elimination was played in two heats. The first part, make a mess and block your opponent’s door from opening. The second part, clean up the mess made by your opponent. After the first heat it seemed like CT made a bigger mess for Jay to clean up and he had the edge going into that half.

Then, Jay pulled out a victory. Jaws dropped, and CT lost fair and square… or did he?

After all, CT chose to put himself into this elimination. If we wanted to leave, this was an easy ticket home. It’s not like he’s on a vacation. He’s in a bunker in the freezing hold Czech Republic. He has a long road ahead of him before he sees a final. 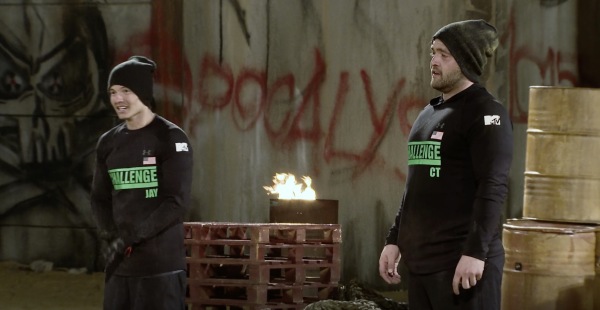 I have seen a few people cry fowl, but I have no reason to believe CT intentionally lost this elimination. He was really close behind Jay, probably within thirty second of winning. He appeared to have a single chain holding the door closed.

Given the Red Skull twist, I think CT wanted to see an early elimination. Not because he wanted the easiest opponent (though it doesn’t hurt), but because he can coast to the end of the game. I don’t think anyone on this cast would choose to compete against CT in an elimination, so if CT got a Red Skill he could lay low and make the final.

If CT has to go into elimination this season, and if he were to lose, it’s best to do it early. He would go home without wasting another month of his life in a bunker. He gets his full appearance fee, gets to be with his family, and reduces his time in the cold. So going into an early elimination is an ideal situation. If he wins, he likely coasts to the end of the game. If he loses, he can return to his family.

I truly believe CT gave it his all in elimination. Any loss sucks, but this is the most ideal way to lose. CT is a staple in the game and will be asked back. He doesn’t need to stick around to build a story line for himself. He’s either playing to win, or not playing at all. He didn’t get the Red Skull, so he’s heading back to CJ.

Ashley learning she’ll get power in the game.
Team Young Bucket Hats
Amber’s strategy 😂 🍑
Tbt. Derrick showing up for his first day of work… first mission he ever competed in!
Poor Hughie. His bum wasn’t built for this.
Priscilla taking control of the game 👑