On The Challenge, you punch someone and you’re gone.

As we saw this week, spitting won’t get you the same punishment. In fact, The Challenge has been quite inconsistent with their acts of violence. While some instances get punished, others just get a slap on the wrist.

These physical alternations fall into the gray zone. They’re clearly not acceptable, but they’re also not ground for immediate disqualification. The viewer may not see immediate punishment, but production likely took some action. Sometimes we see TJ give verbal warnings, but the contestants’ games went largely unchanged.

If someone got a warning, then ultimately went home for their second offense, neither instance will be considered for this list. So, Turbo on War of the Worlds 2 or Nelson on Dirty Thirty will not be considered.

In the old days of The Challenge, people were really passionate about just winning. James, who was often hyper competitive, questioned the Real World team. Syrus took offense and literally grabbed James and put him in a chokehold. They were split up, and no one was sent home, but neither Real World nor Road Rules won that mission. 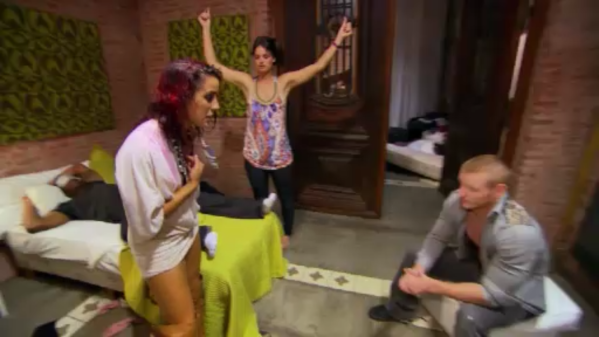 The whole Rivals cast went crazy when they changed locations, and their activity of choice was picking on Cara Maria. Wes, who insisted Cara was super fake, poured a whole bottle of Coke on Cara’s head. We’ve seen a few drinks thrown, but a whole bottle of soda is excessive.

It’s hard to call this unprovoked, because Bear sprayed a fire extinguisher all over Ashley’s bedroom. When the girls left the room they all confronted Bear but Ashley took things to the next level. She apparently took all of the extinguisher dust out of her mouth and spit it in Bear’s face. Perhaps disgusting, but if Puck got to stay, Ashley’s offense seems much more understandable.

8. Puck Spits on David (Battle of the Sexes)

Spitting has always been a gray zone on reality TV. When David got in Puck’s face and accused Puck of domestic abuse, Puck ended up spitting in David’s face. He was actually going to get kicked off, though the response was not immediate. When Jon Murray told him he had to leave, many of Puck’s castmates threatened to leave the show as well. So Puck stayed in the game until he voluntarily left a few weeks later. 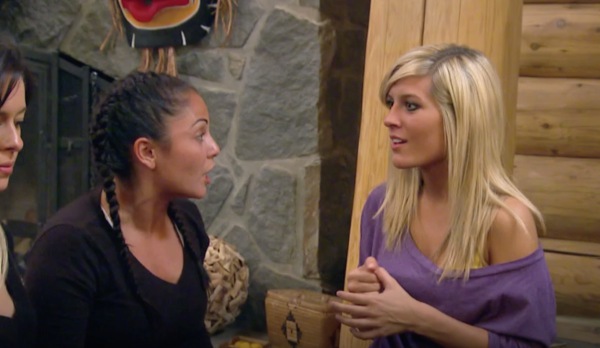 Fresh Meat 2’s main fight was between Jenn and Mandi. While it began by Jenn belittling Mandi’s position in the game, it escalated to a physical attacks. Mandi actually threw a drink on Jenn first, but Jenn then smacked Mandi and Mandi fell off her seat. Cast members like Kenny separated the two, and Jenn got to stay in the game.

The Lavender Ladies were awfully protective of each other. When sometimes-member Marie was going to be sent into elimination to keep the other members safe, Marie was obviously mad. She confronted Sylvia after a night out and got in Sylvia’s face, to the point where noses actually rubbed. In response, Sylvia headbutted Marie away. Apparently Marie could have sent Sylvia home, but chose not to because the headbutt was weak AF.

After realizing CT was flirting with every girl, Anastasia felt upset and embarrassed that she had feelings for him. When CT came into her room, she asked him to leave. When he didn’t immediately left she kicked him out. Literally, she kicked is ass. She probably would have left his ass with a second crack if she didn’t kick him square in the one that was already there.

No one knew Ty’s personality on Cutthroat other than Emily. The two did have some history, and Emily knows how easy it is to get Ty mad. As a prank, Emily sprayed him with shaving cream. Really, this is the ultimate college prank and pretty harmless. Ty’s response? He smashed a plant against Emily’s bed, a top bunk, and rattled the bunk beds until they collapsed. Ty was the next person eliminated, but not because production sent him home. 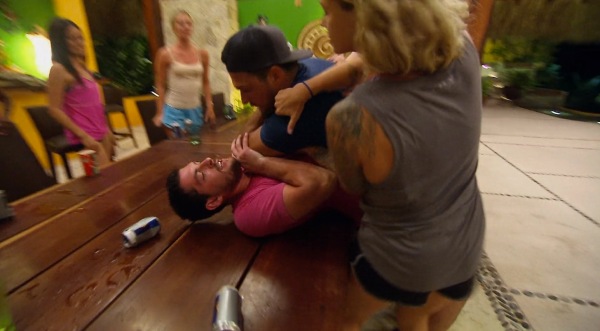 During a drinking game on Rivals 3, Thomas exhausted his “bitch” quota and called Vince a bitch one too many times. Angry, Vince charged at Tom and grabbed him by the throat, pinning him against a table. Vince had his hands around Thomas’s neck, but cast mates and production ended the altercation before it could go any further. TJ did step in and give them both a warning at the next challenge.

Shoving is probably the ultimate gray zone offense, and we’ve seen it happen various times throughout the show. With Marie, the act of shoving was taken to the next level. When Derek was pushed it resulted in a domino effect where Sam fell too, she fell and crashed into a potted plant. While I don’t believe Marie’s intent was for Sam to hit the plant, what do you expect to happen when you shove someone? They’re going to fall. Battle of the Seasons seemed to be particularly lax with punishing people. Marie got to stay on the show and continue with her iconic debut season.

Perhaps the most violent act on this list, Tony got into a physical fight with his brother on Bloodlines after Shane confronted Tony’s reckless drunken gameplay. There was grabbing, shoving, and pinning people against walls. TJ gave them a warning, and they probably only got away with it because they’re related and Tony was creating a lot of drama on the show.

I’m not including this on the proper list because it happened off camera, but Susie admitted to punching and hitting Ace on The Inferno 3. Apparently a group of boys came into the girls’ room while drunk. They woke up the girls and shook Susie’s bed. After yelling and swearing at the boys, Susie punched Ace to get them to leave. All was forgiven, and Susie got a pass.