Five people gone in two weeks. Will the melt continue?

It’s TJ’s favorite time of the game! Trivia. This week’s challenge is called Thrown Off and has the cast clinging onto missiles. They’re asked a series of trivia questions. Get one wrong, you get a strike. Get one right, you give the strike to someone else. The first strike will make the missile drop a little bit, but the second strike makes the missile fall into the water. Once you’re in the water, you’ve lost. The girls go, and they don’t really care. Every girl who gets a strike falls straight into the water except for Kaycee. Inevitably Dee wins. Next up, we have the guys. They have slightly better grip strength and go through their questions. Bananas answers his question with “your mom” because he’s trying to get the house vote and earn a red skull, so Wes and Rogan are the last two hanging. Rogan is losing his grip and jumps off his missile. This makes Wes and Dee a part of the Tribunal. This is a special Tribunal because they get to have a dinner from Burger King, so Rogan joins the other two. Joke’s on Rogan though, Burger King gave the two winners $5,000 each.

Bananas nominated himself to go into elimination because he needs to get his red skull. There’s an issue: Wes also wanted to go in. He reveals at his BK dinner with Dee and Rogan that he planned on sending himself into elimination, and it seems selfish of Bananas to strip him of his power. Bananas goes vote himself in, and despite people feeling like they’re doing him a favor, they send Bananas into elimination.

At the Tribunal, they call down Cory, Kyle, and Swaggy C. Wes insists they leave Josh out of it so he doesn’t feel like Josh is important. Swaggy says he doesn’t care if he goes in, so long as it’s not against Wes. Kyle doesn’t want to face Bananas but Wes tells him he has to get a skull at some point, why not now? Cory, on the other hand, is making subtle hints. He’s trying to sway Wes into throwing himself into elimination. Cory says he’d be happy to be plan B, implying Wes is the primary candidate. 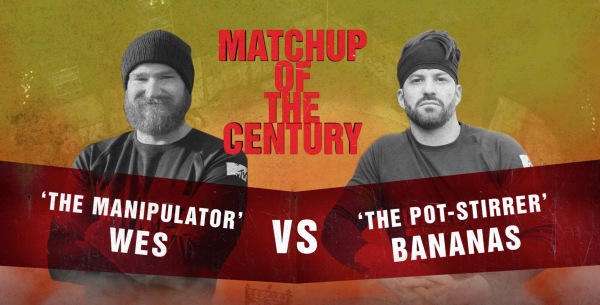 The whole episode points to the reveal at the Tribunal. They enter and see a climbing wall made of boxes. Wes is faced with the decision: force the matchup of the century or send some other chump in to face Bananas. Fortunately for the viewers, Wes takes the bait. After fifteen years, we see Wes and Bananas in a proper Challenge elimination. 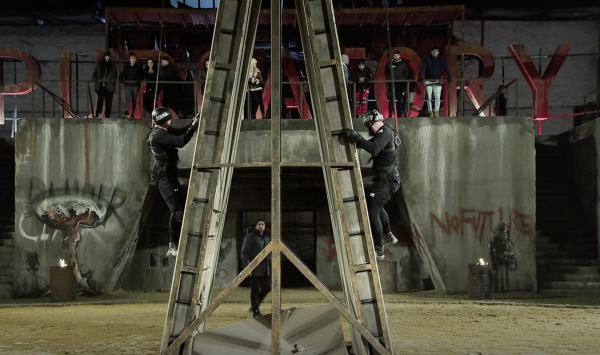 The elimination is called Charge the Wall. The goal is to punch through the boxes and climb the wall. Hidden in the boxes are three batteries, first to obtain all three and power their light wins the game. Immediately, the boxes prove hard to break. Both guys start by getting high then they work their way down. Bananas gets his first battery, but Wes isn’t far behind in finding his first battery. Bananas finds his second battery at the bottom of the wall, and now the race is really on. Wes knows Bananas is making progress, but Bananas whips out the third battery and secures his victory in the match of the century.