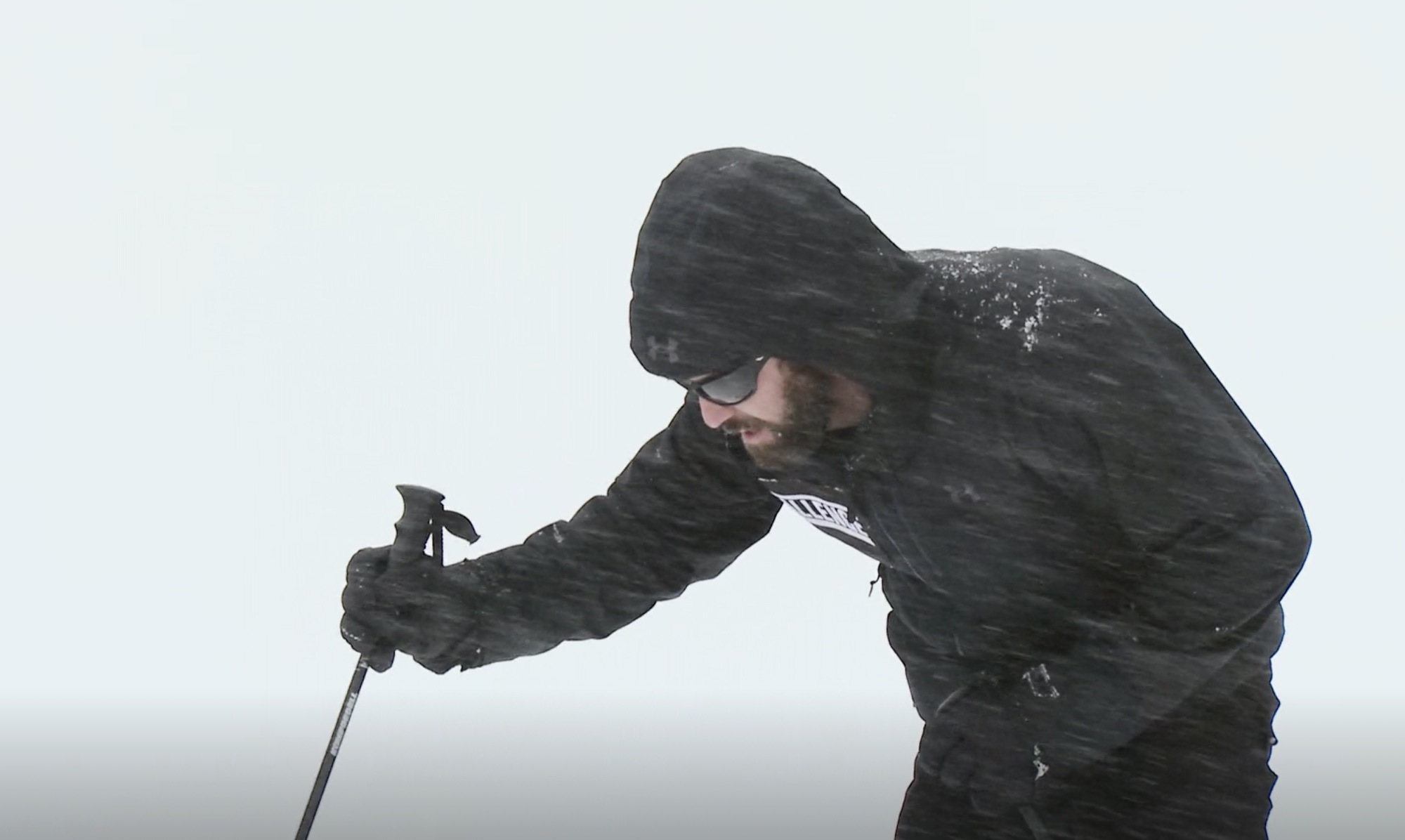 With seven rings comes a lot of speculation. Fans, spoiler accounts, and cast members have been discussing the idea that this season was rigged for Bananas to win since the cast had been discovered.

Please keep in mind, this is a collection of speculation that had existed independently from me. I am not confirming nor denying the claims, but there are some facts and a lot of gray zone information in the mix.

As soon as the Total Madness cast was discovered, some big names were missing. Namely, Cara Maria and Paulie. It has surfaced that Cara believed this season was designed for Bananas to win. She even stated that production wanted Bananas to win the elimination again Theo in War of the Worlds 2, deliberately giving the tallest guy an elimination in a small space. 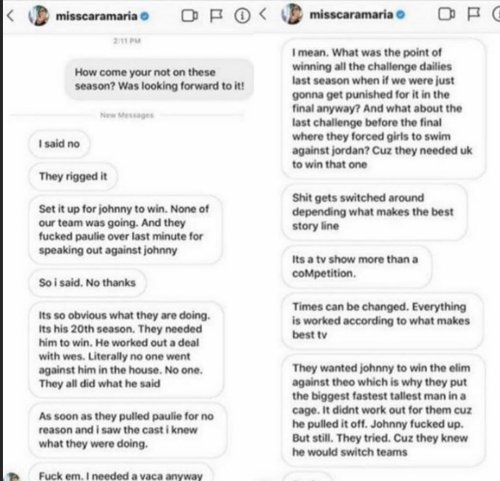 There’s a big thread of allegations here. I’d advise you to read this, as there’s a lot of accusations here.

So, I wanted to break down some of the allegations. Some are suspicious, some are so-so, and some don’t mean much (in my opinion).

Watching the season, there is one odd editing decision that always rang suspicious: Johnny and Wes did confessional together. No one has ever had that luxury, so production was clearly invested in this storyline before the footage ever got to the editors. 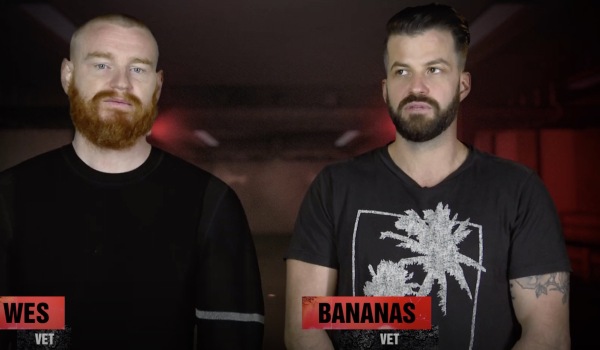 The idea that the Wes and Bananas alliance was staged seems to fly. When Wes got into the Tribunal after Throne Off he won $5,000 from Burger King. Then, he decided to vote himself into elimination. The Charge the Wall elimination also had an element of luck, and Wes himself said he never found the third battery.

The most damming allegation comes from Kyle, who allegedly stated that the final scene was reshot after production convinced Jenny to split her million and allow there to be two winners. Kyle claimed he wouldn’t return to the Challenge after this type of manipulation.

Fessy was told each stage in the final counts, but Cory killed the first day. Suddenly, it just became a race and times weren’t calculated. 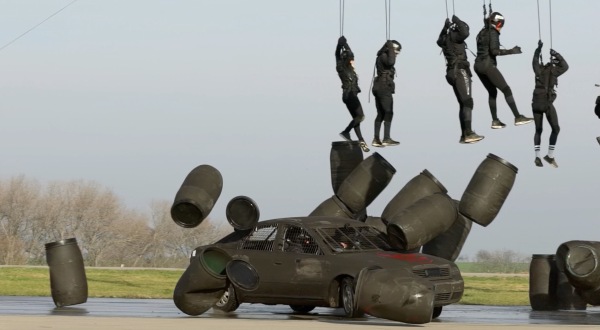 If you watch the Crash Course challenge, it seems Melissa and Kyle deliberately knocked over their barrels. This is why Bananas got a score of 25, because three stacks would have been standing, but Kyle and Melissa could only knock over their top two barrels and not all three in the stack. Of course, this could have been a plan between Melissa, Kyle, and Bananas and not an incident manipulated by production.

Cara Maria’s claim seems damming, but there’s the possibility she’s bitter that Paulie wasn’t cast. It’s possible she wants to blame his off season on Bananas and not the psych test.

Bananas talked about helping Jenny train for Hall Brawl on Instagram Live, but how did he know that would be the elimination? According to him, he guessed it because the elimination has appeared in multiple seasons toward the end. Firstly, this is true. We saw Tori/Jenny and Kyle/Theo in Hall Brawl toward the end of the past couple of seasons. Secondly, we see speculation surrounding being paired with Aneesa in the final. This proves competitors use prior seasons as a basis to make their decisions. There were no pairings in the final, but the decisions was made based on prior seasons.

In the Decontamination challenge, Bananas was the only one to see the lights without running through foam. It’s odd that this was acceptable, but he didn’t even win. He lost to Wes. Time manipulation is nothing new, so it would have been easier for production to just place Bananas in the Tribunal.

Throughout the season the cast says they’re playing for $1,000,000. It’s common for people to say they’re playing for the total prize pool, not just their split of the money. We see this on older seasons, but when the prize of ‘one winner, one million’ is so easily defined it seems odd to change that.

Rogan was told not to tackle Bananas in the Knockout elimination because there were no medics. Later, Bayleigh leaved when the medics show up. But, we don’t know if Bananas received the same directions as Rogan.

Bananas having alliances (aside from the Wes ordeal).

TJ said on Instagram the final wasn’t rigged. He is, of course, under contract. 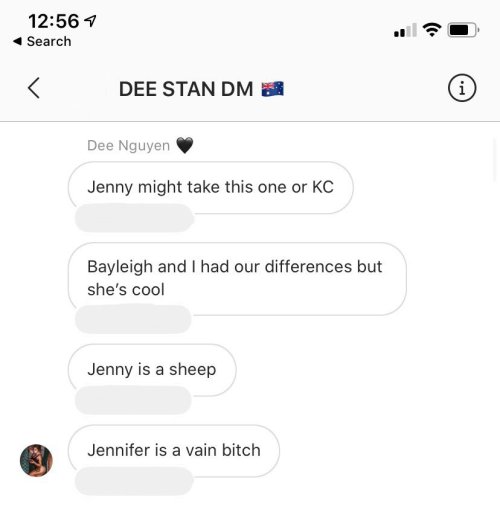 Dee allegedly leaked spoilers to her fans. After her elimination she talked about the potential winner of the season and said it’d be Jenny or potentially Kaycee. She never mentioned a male, which seems odd if it was winner-take-all.

Do you think this was rigged? There’s a lot of sketchy information out there, and a lot of convenient coincidences. I’m not 100% convinced, but it’s reasonable to have some doubts.