It seems like every episode now is sending home two pairs. I hope this trend stops because it will make the season shorter. Last episode 4 people were sent home, and all of the were from The Real World Las Vegas.

Leroy has proven himself as a strong competitor defeating Wes in The Dome last week. However, trivia isn’t his forte (nor is it Naomi’s) because the team had the worst score in this week’s challenge.

The challenge’s Power Couple, Paula & Dunbar, selected Emily and Ty to go into the Dome. Paula admitted that it was because Emily was a strong girl, and Paula didn’t want to be the one to go in there and have to battle her. Naomi was less than happy…because Emily is a strong girl. 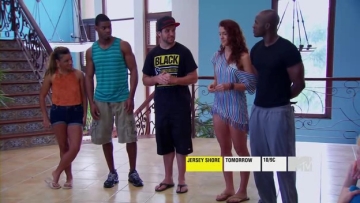 It’s a shame that Leroy and Naomi were sent home. While I know that Naomi isn’t the strongest competitor, she is funny and I liked having her on the show. And I’d like for Leroy to come back without a partner. I think that by himself he’d have a strong chance of winning.