The Real World isn’t just about partying. Cameras roll during the best times and worst times, and this past week they caught one of the saddest moments in Real World history when Jay received a phone call informing him that his mother passed away. Below are a list of some of the saddest moments ever caught on Real World cameras. This is not a list ranking the moments, rather an opportunity to remember some of the struggles that have been encounters in The Real World house and the brave people who endured them.

On the most recent episode of Real World: Ex-Plosion, Jay received a phone call from his father informing him that his mother passed away. His mother, who battled cancer through most of Jay’s childhood was thrilled to see her son receive the opportunity to participate in The Real World. While the news was a shock to Jay, his roommates helped support him and he was able to return home to attend services.

Early in the Seattle season, Lindsay’s friend Bill came to visit her. He was a generally upbeat guy, so when Lindsay received a call informing her that he killed himself she was shocked. After receiving this shocking news, Lindsay chose to place a stronger value on those around her and worked to maintain her upbeat attitude.

Pedro Zamora will always be remembered for showcasing his struggles with AIDS and working to educate others on HIV/AIDS. While this work took a great deal of courage (especially in the early 90s), it was hard for viewers to watch his struggles on TV. There were times when Pedro would feel sick and the roommates would panic because they didn’t know how strong his immune system was. Viewers also watched as Pedro received news of his worsening condition and as those around him reacted to this sad news. Pedro passed away shortly after his season finished airing, but his legacy remains strong.

Frankie’s was different than most Real World roommates, but her roommates were both surprised and saddened when they discovered that her outlook on life was shaped by her struggles with cystic fibrosis. Though she insisted that she never viewed herself as sick, it became clear throughout the season that the disease placed limitations on her daily activities, especially when she was working. Despite a few limitations, Frankie tried to live each day to make herself happy. She passed away a few years after filming Real World San Diego, but her appearance brought awareness to a condition that affect many people.

5. Nany Find Out Her Father Passed Away (Las Vegas 2)

I know, the cast may have known about the attacks before they were filmed reacting, but the sadness and fear portrayed by the cast as they watched the planes hit the Twin Towers were real. Like most Americans, these attacks stunned the cast and they panicked as they reached out to family and friends. After the attacks, the Real World also portrayed the cast as they reached out to neighbors and other members of their community. 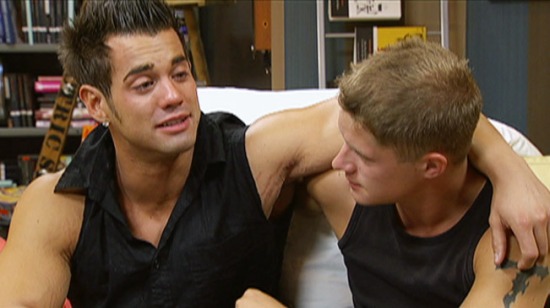 Joey told his roommates that he has substance abuse problems prior to entering the house, but as the Hollywood season progressed we saw just how bad his problems could be. Shortly into the season, the Joey’s roommates were very concerned by his behaviors and staged an intervention. Joey knew he had a problem, and agreed to attend a 30-day program. Sadly, his substance abuse problems haunted him after filming The Real World. He appeared on Celebrity Rehab with Dr. Drew and passed away in 2012.

On the last episode of Real World Las Vegas, Leroy receives a call informing him that his friend was shot and killed by police. This news was completely unexpected, and Leroy breaks down. While this is tragic news, it becomes apparent that Leroy has formed significant bonds in The Real World house and has touched many of the people he lived with.

On The Challenges, we know Sarah as a kick-ass competitors who never backs down from a challenge, but on her Real World season we were able to see her more vulnerable side. During the season, she revealed that she had been sexually assaulted in the past by a teacher and her father. One day, she receives a call from her father. Sarah is shocked that he found her number, and it becomes clear that she does not want to communicate with him. Outside of the Real World house, Sarah is willing to talk about her past and provide advice with other who may be in similar situations.

Austin roommate Danny had a rough start in The Real World house. On the first night he got into a street fight and hurt one of his eyes pretty badly. In the following weeks, he built relationships with his new roommates and was able to reach out to his mother to rekindle their relationship. Despite the fact that they were not always close during his childhood, Danny wanted to work to improve this relationship. Just as it was improving, Danny received the call from his father letting him know that his mother passed away. He flew home to attend her services, but was reluctant to return to The Real World house. Ultimately, he did decide to return, and the rest of the Austin season treated him better than his first few weeks.