The Challenge is a very different show than it was 10 years ago, but one thing hasn’t changed: the drama. 10 years ago production easily could have assembled a cast of rivals, and this is likely what it would have looked like.

Just to be clear, production never attempted a Rivals season 10 years ago, this post is just for fun.

CT & Adam– CT and Adam hated each other since Real World Paris. While there’s no doubt that The Duel 2 put their rivalry on steroids, their street-shoving antics in Paris and constant fighting would have made them a team that hated each other.

Steven & Shane– Remember, this is MTV. While Steven and Shane may not have had a long history of hatred, the fact that Steven got sent home from Battle of the Sexes 2 for slapping Shane will easily qualify these two as rivals.

Abe & Donell– Abram loves to get kicks off of Road Rules, and the first time it happened it was because he hit Donell. However, Donell is definitely guilty of picking on Abe, so they have have had piles of beef. Of course, neither would really agree to work with one another.

The Miz & Brad– Do Mike and Brad really hate each other? Probably not. Is an atomic wedgie enough to make you rivals on The Challenge? Without a doubt. Brad left The Inferno on a bad note because Miz ripped his underwear out of his pants.

Landon & Derrick– Landon and Derrick were constantly in competition on The Inferno 2, and this lead to Derrick’s ear getting torn while the two were wrestling. Then, Derrick sough retaliation by shaving Landon’s hair. Plus, these two would be a dream team.

Syrus & James– If you saw the Extreme Challenge, Syrus got so frustrated with James that he picked James up by the collar and nearly knocked him out. This lead to a lot of animosity between the Real World and Road Rules teams, and certain

Puck & David E.– Of course, these two had tons of real life drama that came to a head on Battle of the Sexes. Their fight was enough to make David quit, but their union as a team would certainly be epic.

Katie & Veronica– After Katie got into a screaming fight with Veronica while V was in the middle of changing shirts, their hatred for each other became apparent. The two later became civil, but never friends.

Julie & Melissa– Though they were once friends, this all ended when Julie allegedly undercut Melissa’s appearance fee for promotional appearances. As viewers, we saw this rivalry during Battle of the Sexes when Melissa cussed out Julie and eliminated her first. 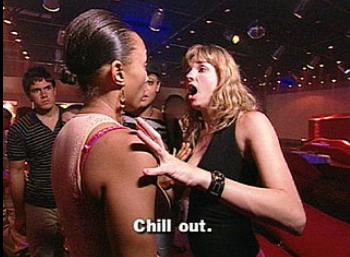 Trishelle & Coral– Coral has many rivals, but the most notable is Trishelle. Perhaps the rivalry began because Coral was envious of Trishelle’s relation with her BFF Mike on The Gauntlet, but the two had some personal arguments on The Inferno that solidified a hatred.

Melanie & Shavonda– Fresh out of Philly, Melanie bugged Shavonda. The two never clicked and Shavonda complained of Melanie’s attitude and complaining. Any progress they made throughout the season was ruined during the cast’s vacation when the girls got into a fight.

Beth & Robin– Let’s be honest, who couldn’t be rivals with Beth? But Robin gets the paring because Beth interfered with her sacred romance with Mark by spreading gossip about a Tonya & Mark hook up on The Inferno 2.

Aneesa & Ayanna– Aneesa has always been caught up in some drama, and 10 years ago she was still feeling the wrath of Ayanna after she announced Ayanna’s elimination from Battle of the Sexes 2. While they were once friends, Ayanna is definitely the type who would hold a grudge.