This is what happens when a tornado meets a volcano. 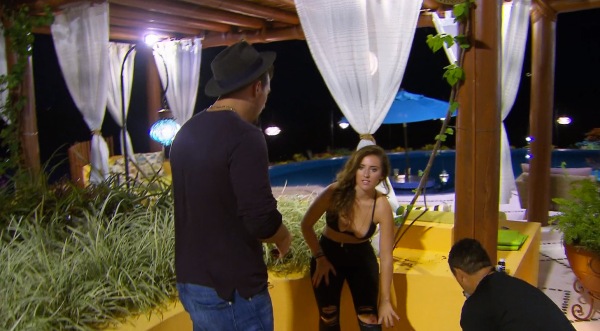 The cast goes clubbin! As usual, some people dance, some people drink, and Tony bitches about his partner. When the cast gets back, Vince is joking around and probably reenacting some story. During this time he quickly turns and runs, knocking Camila down in the process resulting in bruises and a scraped knee. Camila is pissed, and starts calling Vince a bully. Bananas finds this hilarious, so Camila calls him a bully too. Everyone is a bully! And the Camilinator has arrived.

Camila is off her rocker, so Bananas wakes up Tony to put her to bed. Bad idea. All of Tony’s frustrations emerge as he tries to force Camila to bed. Tony and Camila get into a screaming match where he corners her and prevents her from walking past him. Vince, Jamie, and Nicole have to forcefully move Tony, and as soon as he’s moved away Camila throws a plastic cup at him. Devin tells Tony he’s out of line, but Tony doesn’t seem to care because he hates Camila that much at this point.

The Challenge allegedly takes violent behavior very seriously, so TJ come to the house to tell Tony and Camila they need to leave due to their prior night’s antics. TJ makes sure to remind Tony he had a warning on Bloodlines, and both Tony and Camila pack their bags and leave. 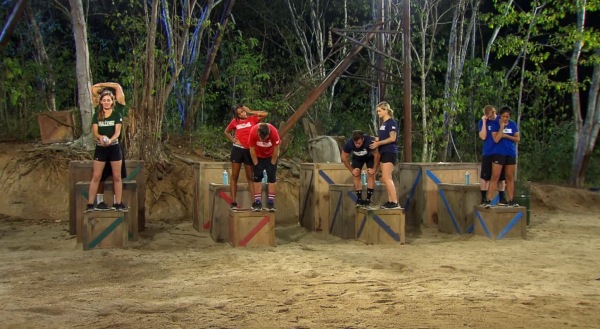 The cast are surprised by a late night challenge! They show up to the Jungle and are told they’ll be standing on boxes all night. There will be horns, and when the sound the teams will move down to a smaller box then an even smaller box. Shortly after the challenge begins, some funky things start happening. First a mariachi band performs. Then, a crew member hangs up a light but falls off the ladder. Multiple other events occur throughout the night including a taco truck feeding the cast, novelty photos with an iguana, and a man’s poncho catching fire.

Some teams quickly realize they ought to memorize the awkward events occurring throughout the night. Other teams are just enjoying the shows and twerking the night away. Those who thought to memorize details from the events were smart, as TJ arrives the next morning and informs the cast they’re going to have to solve puzzles based on the events of the night… but they’ll do that next episode.