This week we saw two of the strongest girls face each other in elimination: Ninja vs. Laurel.

Like many of the “epic” eliminations in Challenge history, something controversial happened. Something happened to detracted from the intended competition and as a result, the victory is questionable.

Laurel and Ninja competed in Branched Out. A climbing competition where competitors are given 21 pegs to climb a tree with 21 holes. First to ring the bell wins. TJ tells the competitors that all 21 pegs must be used. Both Ninja and Laurel make it to the top with one peg left. Laurel sticks her final peg in the top of the tree while Ninja is looking for the final hole. Laurel rings the bell, ascends down, counts her pegs and TJ blows the horn. The game is over?

Not so fast, Ninja is confused as to why she had a peg left. She looks around and climbs down. She finds a hole that she missed- Laurel missed the same one. Ninja sticks the last peg in the hole, climbs to the top, rings the bell. It’s decided she wins.

We all know Ninja is a climber. She’s also the only person guaranteed to be in elimination. The “Challenge gods” (production) give her a climbing elimination. This elimination doesn’t fit with the theme of this season. The first elimination we saw was Pole Wrestle, a “classic” elimination. That’s bound to pop up in any Challenge. Firestarter  and Firing Squad have war-related names. “Branched out” really doesn’t fit the Challenge or war themes at all.

We also see the hole that was miss by both girls. It’s obvious why they missed it, it’s used to mount a GoPro camera. You know, the cameras that film the show? Those things that cast members cannot touch. And as annoying as this placement is, it impacted both girls. So neither was at an advantage.

If look look really closely, you can see the “tree” in the elimination is not a tree at all. It’s a structure set up by production covered is a brown fabric. The fabric is not snugly fitted against the tree throughout the entire trunk. This means, some of the hole for pegs jet out while some can be diminished by the fabric wrinkling. It’s a little more obvious when you’re watching a video of the show, but you can see how one of Ninja’s holes is getting covered by wrinkling fabric. 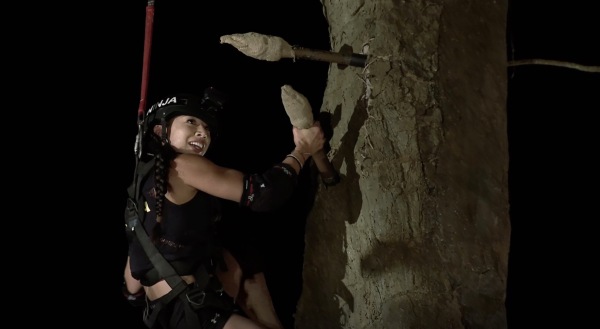 When Ninja gets to the top she’s on pace with Laurel. Ninja has actually said she reached the top first but didn’t ring the bell because she still had a peg. They were close, but I’ll buy this. You can see Ninja at the top of the tree when Laurel rings the bell. No doubt this race was close.

Of course, the biggest controversy here is Laurel’s final peg going into the top of the “tree.” Everyone says this is not a hole, and they’re absolutely correct. It was not supposed a hole. But I don’t think Laurel’s intent was to cheat or to disregard the 21st peg. In her interview with People, she stated she thought the final hole was at the top because eliminations always have a trick. When your instinct is to go for the bell, production wants you to keep climbing. Looking at the footage, the top of Laurel’s tree jets out like there should be a hole. 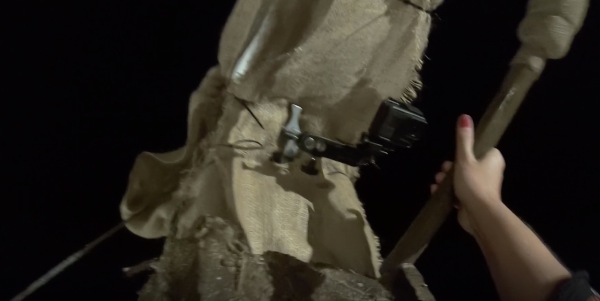 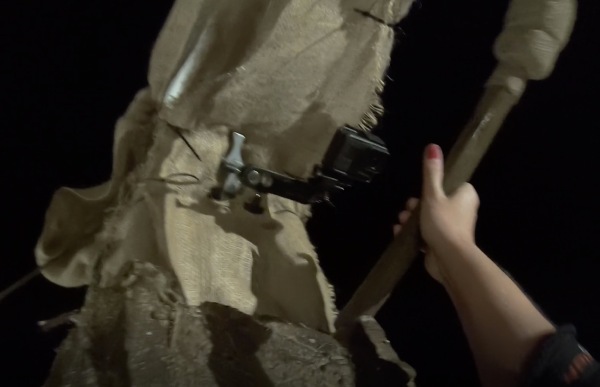 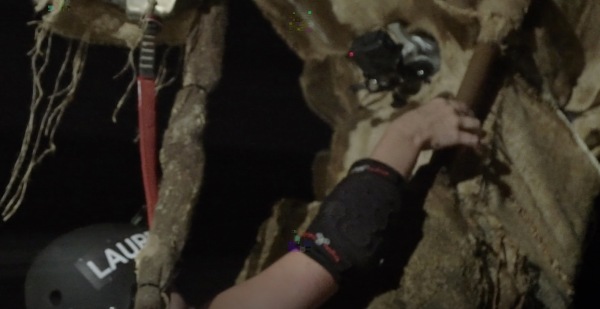 I did my best to capture Laurel putting her final peg into the hole, but the bulk of the footage is at a very clever angel where Laurel’s arm is covering the “hole.” When Laurel does this, the peg goes in without being forced and without sagging.Still, it’s not a hole. It’s the fabric on the “tree” wrinkling. Because it’s at the top, some of the structure of the tree is exposed, allowing Laurel to secure the final peg at the top.

So Ninja climbs to the top of her tree and declares there’s no hole. She’s right, she doesn’t have a hole or anything resembling Laurel’s 21st “hole.” This is because the hole is a flaw in design and Ninja’s tree is inconsistent with Laurel’s.

Laurel rings the bell. Laurel descends and tells Ninja to suck it. Win or lose, this is not a good look. I understand that a lot of people were rooting for Ninja, and this was a divisive elimination. Still not the best look for Laurel to start telling Ninja to suck it. Meanwhile, Ninja descends too. She doesn’t climb down, she her safety cord is slowly lowered. We then see Ninja confused and climb to the top. Where is her top hole?

The next scene we see is Laurel counting her pegs. This is because productions and the refs were contemplating whether or not she won. Of course, this is also play time for Ninja. She’s looking for the last hole. In her mind, the game isn’t over. Then, TJ blows the horn.

According to Jordan, production didn’t know what to do and took a while to check: 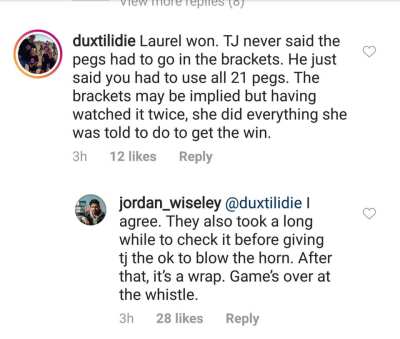 Eventually TJ announces that he was wrong in the end. Ninja won because Laurel didn’t use all of the proper holes. The crowd goes wild and Laurel goes home.

What Should Have Happened?

Production should have known the rules and explained the rules properly. The amount of time needed to make this decision, TJ justifying Laurel’s loss and why he blew the horn (this is shown on TV) is a clear indication that the rule were not understood by the refs and host.

TJ never said you need to place the pegs into the designated holes. He said they were used to help competitors climb. I’m not going to argue that Laurel was not in violation of a rule: production clearly wanted the 21 pegs to go into the 21 holes. But rules should be explained clearly and this leaves room for doubt.

The big issue is that production blew the horn and left Laurel’s win, loss, or right to continue in limbo. Meanwhile, after a horn, Ninja can compete. This is the issue. If Laurel was disqualified from the game, why make Ninja complete the final hole? Laurel’s already lost. If Laurel hasn’t lost, why is she not told to complete the puzzle and fix her mistake?

Production didn’t know what to do, and Laurel was penalized. The horn should have meant game over, as it always has. Whether Laurel DQed or won, the horn should signify completion.

Given the circumstance, some type of rematch should have been implemented. In fact, I think Ninja would have won if they had to complete the course again. As a trained climber, she likely has more endurance than Laurel.

I have not argued that Ninja should lose. She shouldn’t: she abided by the rule. Her persistence in the game demonstrates she’s a real competitor and wanted to stay in the game. But her response on Instagram has unleashed the skeptic in me. 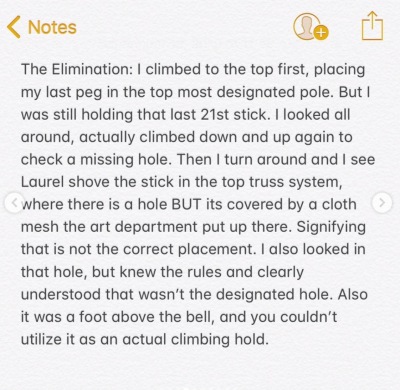 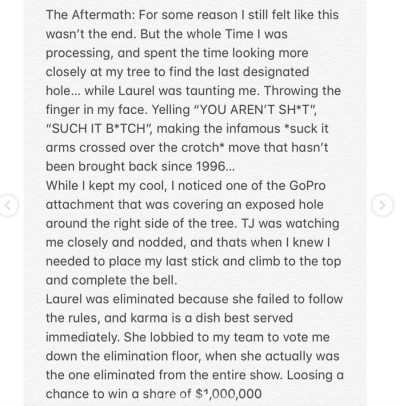 Ninja talks about how she won, and there are two things that stand out. She writes “For some reason I felt it wasn’t the end.” If I was being paranoid, I would think someone told her not to stop. I’m not paranoid, but why even say that?

Then, she mentions TJ giving her a nod when she found the last hole. In what world can TJ give one competitor advice? This this is true, TJ is telling Ninja to continue, indicating Laurel is not DQed and the game is still on. But I doubt TJ would do this. Ninja lives in a world where everyone wants to watch her climb and she thinks she’s the focal point of all scenarios. I believe the TJ nod is like seeing Santa Clause flying through the sky on Christmas Eve. You want to believe you saw it, so you tell people you saw it, but logically we all know it didn’t happen.

Also, Laurel allegedly argued with production for like 15 minutes after the call to eliminate her was made. While we don’t have video evidence of this, this surprises exactly no one and I believe it’s true.