On War of the Worlds 2, Team UK walked away with $1,000,000. Half of that money went to Jordan and Dee, neither of whom are actually from the UK.

On Total Madness, the game is really individual. People will make alliances, but only one person will be the top dog for each sex. With the Red Skull twist, many girls want the first pick of opponent and Tori wanted to go against Jenn.

With the power in her hands, Dee made a deal with Jenny allowing her to go against Jenn. Tori also made a deal with Dee, but apparently Jenny’s deal superseded Tori’s because Jenny shook hands with Dee. Tori and Jordan were upset by this, and argued they helped Dee win on War of the Worlds 2. 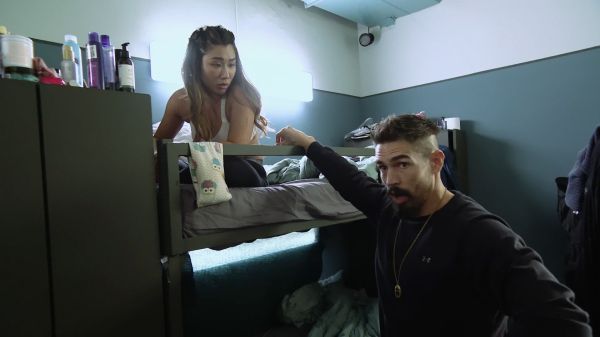 Dee has had a unique narrative on The Challenge so far. She consistently performs pretty well, but her story always involves assistance from other competitors. On War of the Worlds she was Wes’s trainee, on War of the Worlds 2 she relied on Rogan to keep her safe, and now she’s cutting deals with Tori and Jenny.

I do believe Tori and Dee had become friends. They worked together toward the end of War of the Worlds 2, and they probably did like each other. The fact of the matter is Jordan and Tori would look out for each other before Dee. They needed Dee to perform well so they could win that season, and any investment in Dee’s success had selfish intent. For Team UK to win, Dee had to pull her weight.

Dee’s narrative also has an overarching theme where she is lacking some skills, or she is the weakest. Time and time again she has proven this is not the case, though she seldom found herself as the top player. Dee only gets this reputation because she actively works on her weaker skills like swimming or distance running. Other competitors hide their weaknesses, only to have them exposed at a Purge or elimination. Because Dee is transparent with her weaknesses, there’s the implication that other competitors have helped her compensate for them.

Dee owes Jordan and Tori nothing for War of the Worlds 2. I’m sure they liked each other, but Jordan and Tori would have Purged Dee out of the final if it meant they’d both be safe. They are not entitled to be her number one allies.

Did it make sense to send Jenny into that elimination? Probably not. Now Jenny can coast to the final, and most girls would be scared to face her. The smartest move would be been to go in herself, though she couldn’t plan for that. The second smartest move would have been for Dee to give a Red Skull to either Jenn or Big T, ensuring a perceived weaker girl could make it to the final. In the end, Dee wanted to work with Jenny, and they will have a strong bond moving forward.