We pick up after an unnecessary cliffhanger.

Jenna is preparing to go into Purgatory, and Tori’s convinced she’s the girl to take Jenna out. At deliberation, Tori asks to be sent in. Most of the cast agrees, then Nelson speaks up. Firstly, he apologizes to Aneesa for freaking out on her during the Fast & Furious challenge. His statement starts off sincere, then he addresses Tori. He agrees to vote for her, but only after he says she’s only volunteering because she thinks Jenna is checked out and an easy route to a red skull. Kailah jumps in to defend Jenna, and this angers Nelson. He tells Kailah to shut up and go get fucked in a portapotty again. Of course, this alludes to her relationship with Bear, who defends Kailah. Nelson knows he let his anger get the best of him, and this is painting a target on his back.

Nany is crushing on Kaycee. During a night at the club, the two are talking and Nany asks Kaycee to go to the bathroom with her. Kaycee declines because she has a girlfriend at home. Aneesa steps in because she wants to save Kaycee’s relationship and she knows how this situation will look on camera. Nany gets mad at Aneesa for getting involved and claims she should punch Aneesa in the mouth. The girls exchange words and separate until the cast gets home. Nany keeps complaining about Aneesa, and then Aneesa chimes back in. Nany exchanges some low blows, then throws a cup of noodles at Aneesa. They go to bed, and Nany regrets her behavior later.

The Tribunal meets and agrees to nominate Big T, Kailah, and Dee. Kailah is blatantly a burn vote, Big T gets the nomination because Jordan wants the easiest road for Tori to get a red skull, and Dee is being punish for not voting in Tori during week 2. Dee gets angry, and Jordan warns her that he’s very serious about his game. Big T gets upset when talking to the Tribunal and tries to appeal to Jenna and Nany, telling them not to give Tori and easy win. Kailah is just there in case the elimination would favor her, but really, they just need to vote a third person.

Jenna gets a phone call from Zach. He is still mad because Jenna apparently cheated on him, which he only know because she scrolled through her DMs. He’s also mad because she didn’t leave last week like she said she would. Jenna doesn’t want to check out of the game, but Zach threaten that there won’t be a relationship to return to. Jenna even says she wants to win money for their house, but Zach insists it’s his house and she won’t have a house if she don’t quit. Jenna was just give a huge reason to leave, and elimination is right around the corner. 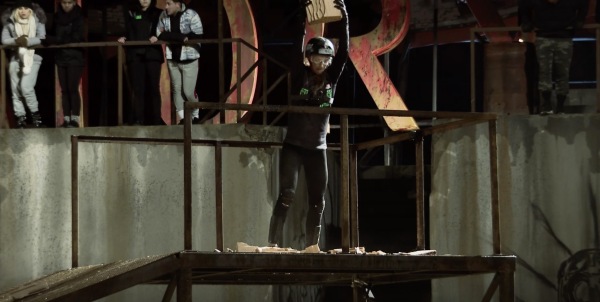 At Purgatory, Jenna volunteers herself. She assures TJ she is not here to quit, but she needs a reason to stay. So she’s either going to get a red skull or get out. The girls are playing a game called Dust to Dust, and the goal is to carry heavy bricks up a steep ramp. They must smash bricks through a grate and fill a wheelbarrow below. Then, they dump the broken bricks into a bucket until it passes a line. Immediately the girls grab two bricks. Tori seems to be moving slightly faster, but Jenna’s strategy works better. Jenna stands up and uses gravity to obliterate bricks while Tori’s shorter throws while kneeling are less effective. Eventually Tori gets the right momentum and starts to catch up. The game is neck-and-neck, the girls dump their wheelbarrows in unison, but they don’t pass the line. So, they each go break one more brick. Jenna gets to the wheelbarrow first, empties it, and defeats Tori. Jordan is mad, but Jenna is qualified for the final.