2013 only brought us 2 new seasons in the RW/RR/Challenge franchise: Real World Portland & Rivals 2. Though we had fewer seasons than we have in the past, we were left with quite a few memorable moments. Let’s check out the best moments from the year.

When Nia entered the Real World house, she seemed interested in Jordan and his argumentative nature. Little did we know, she was trying to prove a point (that he was only argumentative because he had a little thing). After Nia tried to manipulate Jordan’s pants off (literally) their relationship took a turn for the worse, and soon they were in a fight involving Cheerios and ape noises. For the rest of the season, they remained distant until they started to rekindle their relationship in the last episode. By the time the reunion rolled around, they were on the path to becoming real friends. 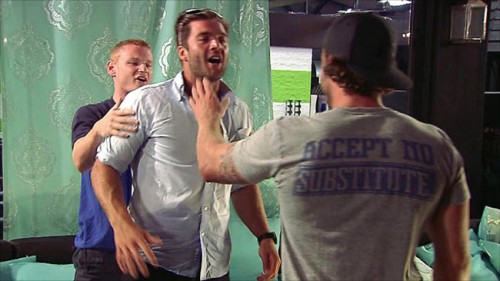 Prior to the final male Jungle on Rivals 2, CT & Wes decided to pick a bone with Johnny Bananas. Right or wrong, you know that Johnny will engage in any argument and the three oldest guys in the house started tossing fighting words back and fourth. Of course, the argument got nowhere, but Challenge fans will remember this fight for Wes bragging about all of his cars and businesses.

8. Lovers in the Bathroom

This entry on the list is really a tribute to Johnny and Averey’s relationship, but if I had to boil it down to one moment, it would be the time that they boned in the bathroom at work…on the first day. Oops! At least they didn’t get fired.

Trishelle and Aneesa’s fight may have been a fight 11 years in the making. As Zach put it”the two oldest broads in the house” were going at it. Aneesa even called Trishelle “Trashelle,” and the fight almost got physicals. Fans might remember Trishelle’s departure because she threw her bags down the stairs, but likely they’ll remember that it ultimately resulted in Sarah getting sent home.

Zach and Trey’s departure from Thailand certainly wasn’t a quiet one. Prior to going into the Jungle, he wanted to get Johnny and Frank to compete against him (he failed and Leroy and Ty were sent in). Then, he thought he won the Jungle, and expressed his success by tossing his helmet at the audience. Then he was told that he and Trey were DQed for working together on an individual component of the Jungle, and surprisingly this news had the calmest reaction.

As long as there’s The Challenge, CT & Diem’s relationship WILL get brought up, and Rivals 2 was no exception. They kissed, has civil conversations, dance together, voted against each other, and flirted with others to provoke reactions. No one really knows where the relationship stands, but CT won’t hesitate to tell you to mind your own business. 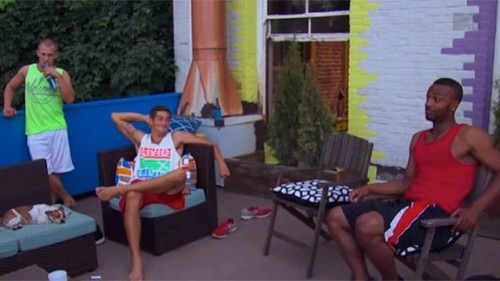 Like most people do, The Real World Portland cast was sitting on the patio having a conversation about doing it doggy style. When Marlon – a former Division 1 football player- talked about his experience he shocked the cast by admitting is was a with another male. Marlon was not ashamed, and after the initial surprise the cast was perfectly fine with it.

3. What What Happens Live

Production decided to try to be cute this year by doing a live reunion, a decision which I sure they regretted quickly. When Knight and Frank were brought to the stage they decided to hold nothing back. Knight, in particular, decided to do his own dirty work and punch Frank in the face. Guess live reunions aren’t the best idea.

I know. Wes, Paula, and Emily won as well. But we’ll all remember Rivals 2 as the season CT FINALLY won.

Remember, this list isn’t a list of cutest moments or classiest moments or even best moment. We’re talking about the most memorable here, and Nia’s fight with Johnny and Averey easily tops the list. It was one of the most brutal fights we ever saw on one of these show, it lasted multiple rounds, and production didn’t even step in. At the end of the day Nia wasn’t even sent home for it. I think this fight will shape Nia’s reputations in future seasons to come.

Were there other moments that stuck out to you? Comment below! I’d love to hear what you think.

Teck stepped us his game this season. Hope he comes back.
How Darrell plays a game of memory 😂
The Austin love is real.
Jodi wasn’t lying when she said she has mammoth hands ✋
Proof these two were homies 18 years ago.
On the way to eat a Greek salad 🥗