It looks like we’re preparing ourselves for a fight between Brian and Cory on next week’s Real World. While this fight may not be the biggest one we’ve ever seen, it will likely draw comparisons to fight seen on previous seasons of Real World, Road Rules, and The Challenge. Let’s check out some of the biggest, and most memorable fights from the franchise’s history. 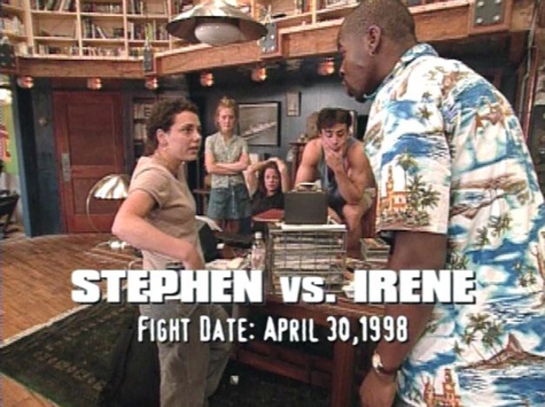 Irene and Stephen started off friends during the Seattle season of The Real World, but that quickly went out the window by the time Irene chose to leave The Real World house. Irene decided she wanted to leave Stephen with some parting words, telling him “,a marriage between you and I would never work out, you know that, because you’re a homosexual Stephen.” This angered Stephen, who was actually closeted at the time. He first sought revenge by throwing Irene’s stuffed dog into the water. Then, as Irene’s taxi was pulling away, Stephen stopped the car and slapped her across the face.

Ty loves to start fights. Adam is known as a loose cannon. When the two got together, tensions quickly arose. Ty began tossing insults at every person he saw and Adam quickly became irritated. To address his irritation, Adam wanted to fight Ty but too many people wanted to prevent the fight by holding Adam back. Eventually, Adam tried to break free of his restraints and punched Ty in the face. He barely hit Ty, but did manage to knock over Mandi and make her hit her head. 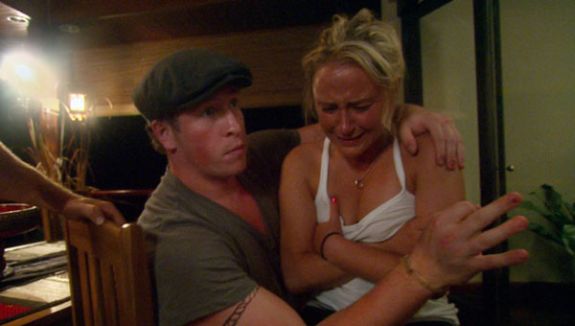 When it comes to Challenges, The Ruins was a huge ball of crazy. This was especially try for Tonya and Veronica, who were to rehash drama from The Inferno 2, a Challenge they did together five years ago. This time, Tonya decided she wanted to stand up for herself and she finally hit Veronica. However, there was little satisfaction in the fight because Tonya was sent home from The Challenge.

On Road Rules Viewer’s Revenge, Adam had a plan to make sure nominations into The Pit were as “fair” as possible. Abram didn’t like this plan, and was not afraid to voice his opinion. Adam did not appreciate Abram’s frustrations and encouraged Abram to “just go home” if he wasn’t going to work with his fellow Roadies. So Abe got his ticket home by punch Adam multiple times. 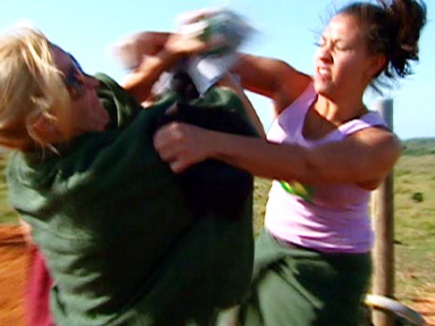 Tina showed up to The Duel with a plan, and it was not to win $150,000. After the second mission, Tina got fed up with Beth’s antics and pleas for camera-time. She rammed Beth “like a football player,” and Beth confronted Tina. Finally, Tina threatened Beth with a punch. All Beth had to say was “do it” and Tina’s fist flew into her face.

Somehow, this fight was over Susie from Road Rules Australia. Abe was becoming friendly with Susie, and this pissed off Gladys. She confronted Abe, and Abe called her a psychotic bitch. I guess “bitch” was the word that set Gladys off, and after Abe said it a second time Gladys pummeled him with fists.

Anyone who watched Road Rules South Pacific got fed up with Donnell’s teasing REALLY quickly. That didn’t stop Donnell from continuing to pick on Abram. Despite Abram’s attempts to be the bigger person, Donnell was relentless. In the end, Abram beat up Donnell, and I can’t say I was disappointed. 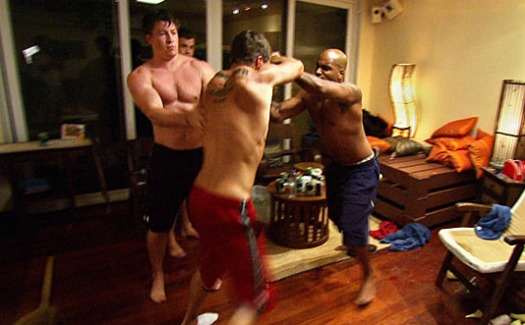 99% of the time Darrell is the calmest guy in the house, but when a drunken Brad provoked him to fight, Darrell could only listen for so long. Darrell has won 4 Challenges and is a boxer, when he says he can fuck you up, you probably shouldn’t ask him to prove it. Brad asked, and he received. Not only did he have the worst black eye in Challenge history, but both Brad and Darrell were sent packing. 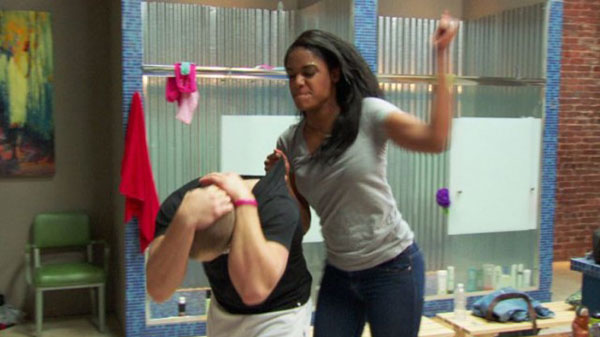 The fight started with some dog shit that Nia didn’t clean up. When the argument was brought up the next morning, Johnny got frustrated and tossed his used tissue and a drink on Nia. Then Nia tossed about 50 fists on the back of Johnny’s head. The fight didn’t stop there, Nia was prepared to beak Johnny with a blow dryer.

Knowing Johnny wouldn’t fight a girl, Averey stepped in and took on Nia. Their battle lasted multiple rounds, all while production refused to step in. Jordan and Marlon tried to stop the fight, but nothing worked. Eventually, Johnny and Averey had to leave the house because Nia didn’t even get kicked out.

1. CT Tries to Murder Adam (The Challenge: The Duel 2) 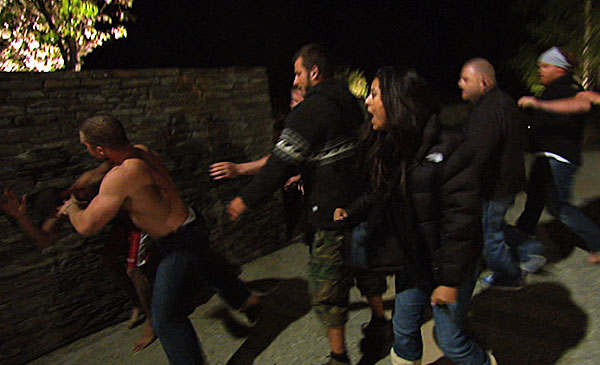 CT’s a beast. Don’t believe me? Just ask Adam. After an argument about Adam’s loyalty to Diem, CT punched Adam in the fact. Production and the cast tried to seperate CT and Adam, but nothing worked. CT was willing to plow through people, beds, and walls to get to Adam. When the finally met in the parking lot, no one could stop CT from fighting Adam. Both men were sent home from The Duel 2 with bruised faces and egos.

This. Fessy got kicked off for THIS?
Big T to imitating Fessy’s shove.
This weeks challenge looks like a gender reveal party 👶
Love her 👑
I think CT summed up everyone’s emotions tonight.
Kyle catching Logan and Big T 😂