This past weekend, a number of Challenge alumni gathered in New York for a Throwdown event honoring Diem Brown and her charity MedGift. While in New York, Throwndown guest Cara Maria was spotted with Paulie Calafiore who is currently starring on Ex On the Beach and first appeared on Big Brother 18.

While I usually try to keep my distance from rumors of hook ups, this has gained some national recognition. Specifically, because Paulie is was in a relationship with Bachelor in Paradise star Danielle Maltby. 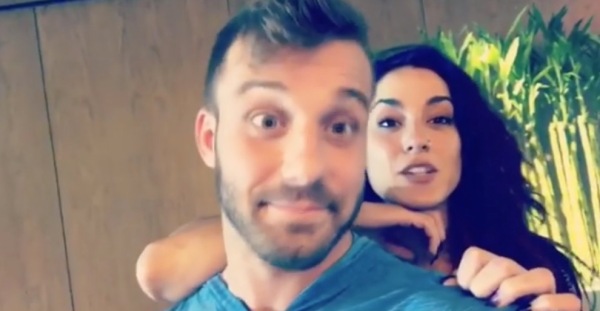 Cara Maria has addressed the rumors only by stating she is single. This would only deny a relationship with Paulie, it wouldn’t deny the potential for a hook up. Plus, the rumors have been fueled by other information posted on social media. There is a picture of Cara Maria holding a hand that is believed to be Paulie’s, given the fact that one of Paulie’s tattoos can be seen on the wrist. Johnny Bananas (also a Throwdown guest) also posted an Instagram story this weekend where the hook up is alluded. He is talking with Cara Maria about a hook up, but no one is named and she mentions she is single. Bananas says this will be revealed in due time.

Perhaps, more information about this hook-up will emerge on The Final Reckoning, where both Cara Maria and Paulie are on the cast. In the mean time, Cara Maria isn’t trying to stop the rumors. She posted follow-up Instagram stories of herself holding a man’s hand, presumably Paulie.

Update, Paulie and Cara Maria have commented and confirmed there is something going on. It was kind of kept under wraps because it began on Final Reckoning, but Paulie ended his relationship with Danielle over this.

Nelson and his mom!! This is where he gets his smile from :)
Ashley learning she’ll get power in the game.
Team Young Bucket Hats
Amber’s strategy 😂 🍑
Tbt. Derrick showing up for his first day of work… first mission he ever competed in!
Poor Hughie. His bum wasn’t built for this.