There’s a good amount of controversy surrounding The Ruins, but there’s one conspiracy that gets brought up fairly frequently. It’s a behind the scenes rumor that often makes viewers question the merits of the season.

No, I am not talking about that controversy. I’m talking about the fact that Susie married one of the crew members. Out of the fourteen girls on this season, only one girl won and it was Susie.

While this doesn’t get discussed too often, I’ve seen the theory resurface time and time again over the course of a decade. Susie and Sarah have talked about this multiple times on the Brain Candy podcast and denied that Susie’s husband helped her win. Needless to say, Susie is a biased source.

But I’ll say it right here. I do not think Susie won because of her husband, but I do think production played a slight role in her winning. 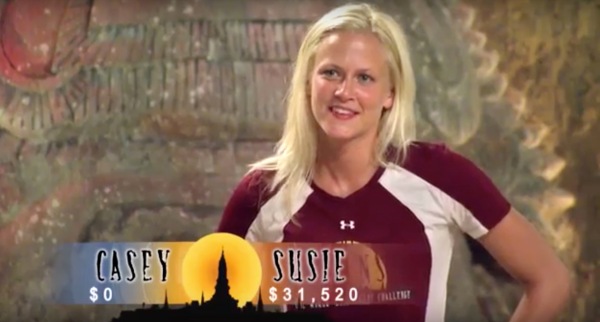 Firstly, Susie’s husband is credited as a “sound mixer” by IMBD. During filming he’s probably one of the guys who walks around with a boom mic to catch audio. These people are instructed not to talk to cast members or to interfere with their daily lives. Susie and Adam didn’t really hit it off until the wrap party for the season. Neither Susie nor Adam did anything wrong, and Adam went on to film other TV shows. His credits include Hell’s Kitchen, Dance Moms, and The Biggest Loser Asia. I can only imaging what he had to witness while filming The Biggest Loser, but clearly his relationship with Susie hasn’t blackballed him from future opportunities.

In all actuality, Susie worked with the majority alliance and won because of that.

There is, however, a rumor that the final elimination was rigged. During Muay Thai competitors were tasked with kicking bamboo chutes and breaking them before banging a gong. Susie flew through it while Casey struggled. Editing made it look like Casey was just weak, but allegedly the boys went up to the chutes after the elimination and confirmed Casey’s were really had to break.

Do I think this was rigged? Probably.

There are two other possibilities: Casey really was weak or the bamboo wasn’t tested and Casey got stuck with really firm chutes.

Truthfully, I think production wanted Susie to win, but not because they loved Susie. It’s quite the contrary. By the time this elimination had come around every Challenger guy had been eliminated. The final was right around the corner and Susie was the only female on the Champ team.

Let’s pretend Casey did win. This gives us a final where four of the strongest male competitors ever are facing three girls, one of whom is Casey. Who do you think is going to win? The final would have been so predictable that it wouldn’t be worth watching.

Production wanted Susie to win the final elimination because, by that point in the game, Kellyanne and Sarah were stronger as a duo. If anyone was going to be an anchor in the final for the Champs it’d be Susie. This at least gave production some hope that the final could be close.

I truly think The Ruins final was a concern for production because the teams were so lopsided. Why else would they have a “choose your own adventure” style final where teams had to complete four different legs in no specific order? This allowed production to edit the footage to show Sarah and Kellyanne excelling without allowing viewers to compare them to the Champs. It looked like Sarah and Kellyanne were beating the Champs at first, but we don’t know if this is true. It could just be editing magic.

In all actuality, I think Susie is a good competitor and managed her social game really well on The Ruins. Production did her no favors, but I’m happy for her and Adam. Their romance is probably the only real positive to come from this season.