Despite quitting on War of the Worlds 2, Faith has been the talk of the week. She’s gone on record to justify her leaving the show, and has been accusing some of the boys in the house of bullying her. But, there’s more to the story than what we’ve seen.

We kind of saw this, but a good deal of the cast mates were sick. Wes was sick, Faith was sick, half the cast was sick. So Faith wasn’t just tired, she was fighting off an illness. Apparently it was a bacterial infection and multiple people were given medication they couldn’t understand.

Still, her reaction was a bit extreme. If so many people were sick, why was she the only one reacting so much? And why would she bang pots and pans?

She says it’s a respect thing. She wanted to sleep, asked the boys to quiet down, and they blew her off. They kept talking, even louder, and said nobody knew who she was. She felt this was blatant disrespect for the sake of being disrespectful. More specifically, she felt Bear, Kyle, and Theo were the loud ones and they kept being loud to spite her.

So he wakes up Bear a couple of hours later. This is what we see, the whole house gets up. Faith insisted she was trying to talk to Bear after he was woken up, but he kept yelling at her (shocker…). Security was there, the argument ended, everyone goes to bed. Then production gets Faith up for a confessional. Kyle is waiting for her with Laurel and Kyle continued to ask why he was woken up. Laurel says nothing, and life moved on.

After this, Faith felt ganged up on. She bounced. She didn’t want to stay there, sick, and be berated by a bunch of men. 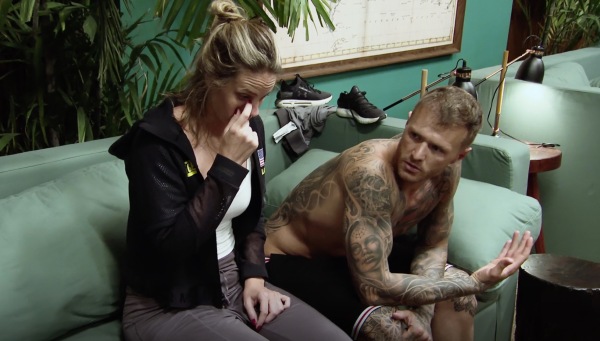 The incident has been discussed on social media.

Most notably, Faith has been targeting Theo. Saying karma comes back in mysterious ways and saying she’s glad she has 20/20 vision. Of course, this is a reference to an accident Theo had last week where he was blinded in one eye. Not a good look for Faith. Theo maybe have been a jerk, but I wouldn’t wish blindness upon him.

Of course, skeptics exists. There is a rumor, just a rumor, that Faith had some business to deal with back home. If she just left the show, she’d lose her appearance fee. However, she sold her departure as a story of being bullied. This way she got to leave and get her appearance check. Just a rumor though.

Don’t expect Faith back on the show any time soon. She recently announced she is pregnant! Perhaps The Challenge isn’t the best environment for Faith, but I wish her a safe pregnancy and I believe she’ll be a stellar mother who raises a badass kid.